RETURN of the PHANTOM PATRIOT 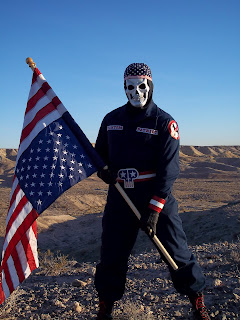 Ok. It is time now to talk about Richard McCaslin aka the Phantom Patriot aka Thoughtcrime.

This is a story that I've gotten to know since Fall of 2010. It is a complex story that I've often had a hard time wrapping my head around, but we'll look at this story in simple steps.

McCaslin was in fact one of the earlier known RLSH prototypes.

McCaslin served in the Marines and even as Batman for a Six Flags stunt show in the late 1990s. Submissions sent in to comic book letter pages show he was talented at duplicating the costumes of his favorite superheroes.

In the 1980s, McCaslin read Night Rider’s How to Be a Superhero book, a self published guide to being a RLSH written in 1980. McCaslin had mail ordered the book via an ad in the back of a Marvel comic book. McCaslin was excited about the book and drove from Zanesville, Ohio (where he was living at the time) to Morgantown, West Virginia (where the book lists a po box as its address) and spent a night cruising around, hoping to run into Night Rider on patrol.

He adopted a new persona, The Lynx, in 1985 and began patrols of Zanesville with a partner named Iron Claw. Iron Claw, still a teenager, was probably the first RLSH sidekick. McCaslin developed other personas over the years, mostly for TV, stage, or movie ideas.

In 2001 McCaslin developed the Phantom Patriot persona, who had the goal of protesting the “New World Order.” Phantom Patriot’s gear featured a navy blue jumpsuit, boots, and a skull mask with an American flag wrapped bandana style on the head. An elephant decorating one arm and a donkey on the other both were cancelled with a red circle and slash.

He travelled to make a series of “symbolic appearances” on the east coast, leaving literature he had written about the New World Order government conspiracy at the Minuteman statue, the White House, and the Boston Tea Party Ship. A trip to the Statue of Liberty was aborted because of security.

Back home in Austin, Texas, where McCaslin was living at the time, he saw a documentary produced by conspiracy theorist Alex Jones on public access. The documentary, “Dark Secrets of Bohemian Grove,” claims there are satanic rituals held there.

The Bohemian Club, located in San Francisco, owns the Bohemian Grove, located north of San Francisco near Monte Rio. The Grove is a 2,700 acre resort deep in the redwood forest. It is members only, men only, with no media access allowed. Members include the most powerful and wealthy men in the country-- every Republican president since 1923 has been a member as has several Democrats, as well as lots of high level politicians, CEOs, businessmen, actors, and entertainers. The Grove is open year round, but the biggest event of the year happens in July, a two week long Midsummer celebration. This more or less consists of the Bohos networking, getting drunk, and partying in the woods.

What conspiracy theorists have latched onto is this elite gathering of powerful men’s opening ritual for their Midsummer meet up-- a bizarre ceremony called the “Cremation of Care.” In this production, several members of the club (McCaslin refers to them as “Bohos”) dress as druids and burn an effigy at the foot of a 40 foot owl statue, the “Great Owl of Bohemia.” There is eerie music, pyrotechnics, and the owl statue even speaks to them in some cryptic poetry (and to make things even weirder, the owl’s voice is a recording made by beloved news anchor Walter Cronkite - I can’t make this stuff up!)

Many people who have written on this suggest it’s nothing more than theatrics-- a sort of frat boy ritual for rich old men.

The Phantom Patriot didn’t think so, though, as he informed me through a series of e-mails and hand written letters. He was (and still is) convinced that live human sacrifice took place there, and he planned a raid to save the victims and expose the Grove. On Jan. 20, 2002 he slipped into the Grove with the following: a rifle, a pistol, a knife, a sword, a bullet- proof vest and a homemade smoke bomb launcher. He also had a crossbow and a baton in his truck. What he didn’t have was adequate batteries for his flashlight, so after he entered the Grove he found himself lost in the dark. He broke into a cabin and spent the night.

At daybreak he found the Owl of Bohemia, which he had planned to destroy, but found it was made of concrete instead of wood as he had anticipated. He decided to burn down a nearby mess hall instead. He lit it on fire, but the sprinkler system extinguished the blaze and sounded an alarm. After a short but tense standoff with the Sheriff’s department, he surrendered.

McCaslin was sentenced and imprisoned from 2002-2008. During this period he drew a comic book version of the events and developed a new, Jehovah’s Witness - themed superhero - The Revelator. He abandoned this persona after he dropped out of the religion.

“I quit, in front of my whole congregation after learning that their founder, Charles Taze Russell, was a 33rd degree Freemason and Knights Templar - a major player for the Illuminati!” McCaslin explained in a letter.

The Phantom Patriot was paroled in May 2011. His parole conditions stated he must stay 35 miles away from the Bohemian Grove, and informed him, “You will not possess or have access to costumes-clothing.”

After his parole period was over McCaslin adopted a new persona-- a George Orwell inspired hero named “Thoughtcrime McCaslin.” In summer of 2011, he hit the road traveling to all 48 lower states to hold peaceful protests against the New World Order. I actually met him and shadowed him for his protests in downtown Milwaukee and at O'Hare airport in Chicago, where he protested specifically against the TSA.

McCaslin currently lives in Las Vegas where he incorporates the Thoughtcrime persona to protest appearances by politicians and has protested with the 9/11 Truthers. 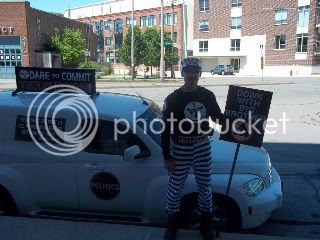 THE RETURN OF THE PHANTOM PATRIOT

In January I was invited out to San Francisco to witness McCaslin return as the Phantom Patriot to commemorate the tenth anniversary of his raid on the Bohemian Grove. He recreated his Phantom Patriot outfit and marched to give a protest at the Bohemian Club headquarters in downtown San Francisco. RLSHs have been reluctant to reply or participate with McCaslin in protests because they don't share his beliefs, but in this case he was joined by two members of the Pacific Protectorate-- Motor-Mouth and Mutinous Angel.

Outside of the Bohemian Club, McCaslin spoke for about ten minutes, describing his beliefs about the Bohos and reading an excerpt from the book Trance-Formation of America, written by Cathy O'Brien and her husband Mark Phillips. In the book, O'Brien claims that she was brainwashed under the government's MK Ultra program and used as a sex slave by several prominent American and foreign politicians. McCaslin read an excerpt in which O'Brien describes being used as a sex slave in the Bohemian Grove.

A full video of the appearance is below. I am currently developing a book that will follow Heroes in the Night that will be about McCaslin, his life and beliefs, working title: Phantom Patriot.