Welcome to rare new post on the Heroes in the Night blog. While working on my book Heroes in the Night, I was introduced to a person named Richard McCaslin aka the Phantom Patriot, who has an interesting life story I thought would make a good book in itself. It's been an exercise in patience-- I've slowly been working on this book since 2010. There is still a way to go, but it is getting there.

I decided one thing I needed was a trip down to Nevada, where Richard now lives, so I could visit him in his home environment. I asked if there was anything in particular he'd like to do when I visited, and he mentioned shooting an action packed script he had written, with myself as a co-star (along with actor extraordinaire G'nik and villain Illuminus). I was game, and the result is the following video, which I am told will be an official selection at the High Desert Film Festival in Pahrump, Nevada. Exciting stuff! 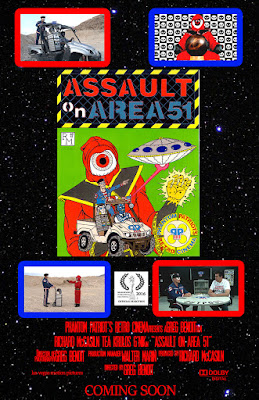