Happy Holidays from Heroes in the Night!

2013 was a great year for Heroes in the Night-- we saw publication, some great reviews, and some fun in-person events. We've got more of the same planned for 2014, but now it's time for a holiday break.

Have a wonderful holiday season!

If you've read my book Heroes in the Night, then you'll probably recall a story in the "Early Prototypes" chapter about a man named Richard McCaslin aka the Phantom Patriot.

McCaslin now lives outside of Las Vegas and is still active as the Phantom Patriot. He compiled the video below which has reports on his activities over the last year (and also includes a shout out spot to Heroes in the Night!) 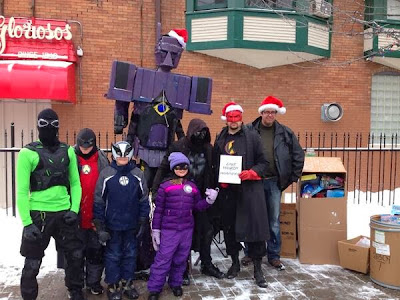 Local Milwaukee RLSH team the Challengers do a charity toy drive every year and this is the fourth year I've done a small part in helping them with their mission. At this annual event the team asks for in-person donations of toys and art supplies for two charities. Gingerbread House donates toys to low income families in Washington County. Meta House is a rehab program in my neighborhood (Riverwest) for women and their families. They incorporate a lot of art therapy into their programs.

This year, we set up the RLSH appearance at Dryhootch, a non-profit benefit coffee house that helps veterans and their families with a variety of issues.

It was a cold and snowy day, but that didn't prevent the Challengers from showing up in force. The Watchman, Blackbird, Night Vision, the towering Skyscraper, and the Junior Challengers--Wonder Boy, Badger Boy, and Guardian Girl-- were all there.

Overall, the toy drive was a huge success. Our friends at comic book store Lost World of Wonders hosted a show earlier in the week and offered free admission with a toy donation, and donated generously themselves. The Junior Challengers even pooled some of their own money to buy donations. Good work!

FOX 6 stopped by to shoot some footage for last night's News at 10. Here's the clip:

When I returned home and checked in on Facebook, I realized the Challengers weren't the only ones try to do some good out there this weekend.

For example, Crusader Prime reports that he and fellow Chicago RLSH handed out supplies-- gloves, blankets, shirts, socks, hand warmers, and food-- to the homeless yesterday in the area around lower Wacker Drive yesterday. He says they ran into a lot of people in need and handed out the amount of supplies they usually spend all night distributing in about an hour and twenty minutes.

Meanwhile, on in the West, teams were participating in a quarterly RLSH outreach program called S.I.G.N.S. of HOPE. In San Francisco, the California Initiative handed out supplies including water, first aid kits, cookies and 240 homemade burritos (!) yesterday in the Mission District. Also, in Seattle, members of the Washington Initiative and other Seattle superheroes teamed up to do a similar hand out of supplies and food.

Heroes in the Night Answers Your Cyber Monday Questions 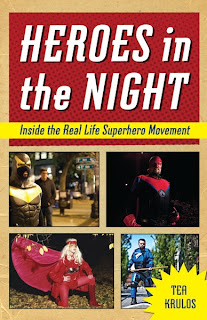 -What formats is the book available in?
Paperback and also a few different types of e-books.

-Do I need to be a comic book geek to understand this book?
No! I was careful to write the book to be accessible to people without comic book knowledge. If you're into comic books, a lot of references will be familiar terrain. If not, you'll still be able to follow along and will pick up some comic book history along the way. The book also appeals to anyone interested in contemporary sub-cultures and unique social movements. Heroes in the Night is listed under social studies/pop culture, and sometimes placed in cultural studies or true crime.

-Do you have any reviews of the book I can read?
Yes. Here's a great one from Pop Mythology:
http://www.popmythology.com/heroes-in-the-night-review/#

-Where can I find copies of the book online?
Here's a list of links to places that sell it online:
INDEPENDENT PUBLISHERS GROUP
BOSWELL BOOK COMPANY
BARNES & NOBLE
AMAZON
POWELL'S
INDIEBOUND
iTUNES
MICROCOSM

Posted by Tea Krulos at 7:14 PM No comments: