One of the colorful characters I found in my Real Life Super Hero research was a highly disgruntled British bloke that called himself Angle Grinder Man.

Angle Grinder Man operated in London and Kent (his hometown) and his origin story is simple: he snapped after one too many parking violations. In those cities (and others around the world) you will receive what is known as the "boot" or the "clamp"-- a device attached to the wheel of your car-- if you are parked illegally. You then must pay a hefty fine to have someone come around and unlock the device to free your car.

It is aggravating and many angry motorists think it is a racket.

Enter Angle Grinder Man. He first appeared around 2002 or 03, dressed in blue tights and a gold cape, sporting goggles and revving up a gas powered angle grinder. He set up a hotline for frustrated, wheel clamped citizens and would then rush to their side, sawing through the clamps in a shower of sparks. It took him about 45 seconds to saw through a clamp.

"There are not enough parking spaces for people, and no public transport to speak of," Angle Grinder Man declared in a 2003 television interview. "It's a complete joke and yet instead of us suing the government for shambolic mismanagement, we allow them to take back money from us, the very people they have let down."

In 2005, Angle Grinder Man disappeared as mysteriously as he had appeared.

But now, almost a decade later and thousands of miles away, a new superhero has taken on Angle Grinder Man's mission. He is  Wheel Clamp Man of Perth, on the west coast of Australia.

Wheel Clamp Man's costume looks like RLSH meets the Village People. He asks for a donation from motorists he helps and reportedly gives the money to the homeless.

Not surprisingly, Perth police aren't happy. They've encouraged the public to turn over the superhero so they can charge him with criminal damage.

--Report from The Telegraph HERE. 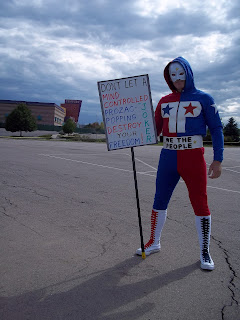 Last post I wrote about a RLSH named Beast who was arrested outside of a Home Depot after observers thought they were witnessing a copycat of James Holmes, the man responsible for the shootings at the Dark Knight Rises premier in Aurora, Colorado. I received an e-mail from the conspiracy theorist RLSH known as Phantom Patriot who informed me that he traveled from his home in Las Vegas to Aurora just to protest at the Century 16 Theater, where the event occurred.

He held a sign that read "Don't let a mind-controlled , Prozac-popping Joker destroy your freedom !" He says reaction was mostly positive. Police told him to stay on the public sidewalk.


"I want the RLSH Community to understand that (as crazy as this sounds) one of the (minor) reasons that the New World Order staged this bizarre crime might have been to scare us into inactivity. They don't want a bunch of "Zorros and Robin Hoods" running around and inspiring the common people to take a stand against a corrupt government. More and more , we are being sidetracked into charity events and reality TV. Where's the risk ; where's the heroism in that ? It has become apparent that my previous advice to other RLSHs was correct...don't dress like a Black Blok Anarchist / terrorist. Of course , a protest sign does wonders , to explain yourself to the public. I stuck my neck out (again) to make a point. I challenge the other RLSHs to do the same!"

I've not written about the tragic shooting in Aurora, Colorado at the Dark Knight Rises premier simply because I don't think I have words to express how terrible it is.

The shooting, still prevalent in the news cycle, has naturally made people on edge about...unusually clad people lurking in public places. For an example, we can look at the latest RLSH arrest, a man patrolling the New Jersey suburb of Mansfield Township (population 8,544, according to Wikipedia) that calls himself "Beast."

According to a report on lehighvalleylive.com (which you can read HERE), the Beast was hanging around a Home Depot parking lot, asking shoppers if they needed his assistance when people began to make the Colorado shooting connection in their mind. One woman saw Beast reach into his pocket and was afraid he was going for a gun. He was grabbing his cell phone.

Afraid they were observing an Aurora shooting "copycat,"concerned customers and store employees called police, who arrested Beast in front of Home Depot's garden section. They charged him with disorderly conduct and possession of handcuffs, according to the report. They also drove him to Hackettstown Regional Medical Center "to be evaluated for crisis intervention."