Heroes in the Night is really coming together rapidly now- out of 16 chapters, Chapters 1-7 are now done, so are Chapters 10-11. Chapter 9 is getting wrapped this week.

Each chapter has several sidebars. Some of these are reflective, some informative. I just got the illustration by David Beyer, Jr. for one of these, so I thought I'd share the sidebar here as a bonus.

All of these early prototypes indicate that the idea of adopting your own superhero persona in real life is an idea that has been floating around since at least the early 1970s. But these are just the documented cases.

It is impossible to say how many more undocumented RLSHs were out there and how far back it might go. Could Golden Age RLSH have existed, inspired by the old superhero serial silent films or old radio programs? Perhaps George Reeve's Superman or Adam West's Batman inspired unknown RLSH? If they did exist, it's even possible there was media on them- think of how many editions of newspapers sit in archives, untouched for decades.

Who knows, maybe someday you’ll be going through your grandparent’s attic and find a dusty, neatly folded RLSH costume inspired by the Golden Age version of Batman or Captain America.
Posted by Tea Krulos at 2:50 PM 1 comment: 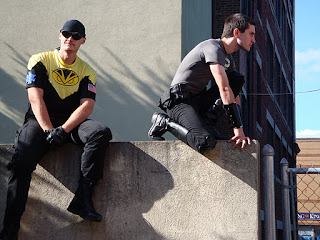 I was a guest today for an hour long radio show, The Colin McEnroe Show, on Connecticut Public Radio (WNPR). Also joining me as guests over the course of the hour- Knight Owl, Geist, Rock N Roll (see previous entry for a profile), and Seattle detective and department spokesman Mark Jamieson.

Det. Jamieson is kind of destined to be the man who has to answer questions about Phoenix Jones and the Rain City Superhero Movement until the end of time, often telling media outlets that he feels the RCSM are putting themselves and others in danger.

We were really hoping to hear from Jack aka Razorhawk, so he could talk about his RLSH design shop, Atomic Hero-Wear, but unfortunately the clock ran out before he had a chance to speak.

There were a few questions from listeners who called in, and a guest caller- Superhero of Clearwater, Florida. Apparently the lines were jam packed the entire show.

I also mentioned local Milwaukee RLSH The Watchman and former Connecticut RLSHs Runebringer and Scavenger (where are they now?).

I think the show went absolutely great and a big thanks to the Colin McEnroe Show crew and the guests who called in.

You can listen to the show here:
www.yourpublicmedia.org/content/wnpr/colin-mcenroe-show-being-real-life-superhero
Posted by Tea Krulos at 4:39 PM 1 comment: 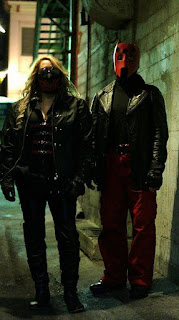 Operates out of: Oakland area of the East Bay

Quote: "I don't consider myself a hero. I'm a pacifist by nature. I'm just another person who's trying to make a difference whenever and wherever I can."

Author's notes: I was in the San Francisco area last week and got a chance to meet up with the California Initiative. I joined them as they went on a mission to seek and dispose of used heroin needles in the Mission area of SF. The group was very hospitable to me (as the Initiative as a whole always has), and I appreciate it greatly. Rock will be joining me and others on a radio show this afternoon, details to follow later today.
Posted by Tea Krulos at 7:43 AM No comments: