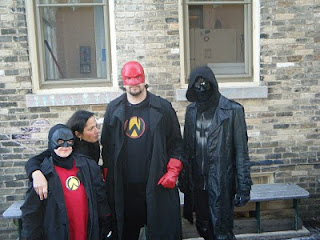 Wonder Boy, a Meta House nurse, The Watchman, and Blackbird outside of Meta House

On Saturday, December 11, I joined The Watchman, Blackbird, and Citizen (of Chicago) for an in person toy/art supply drive in front of Fuel Cafe, here in Milwaukee. People were generous and I wrote more about the day and shared photos in a previous blog entry HERE.

I again joined the heroes for the two deliveries of the donated bounty. On Friday the meet up spot was my kitchen, from which we headed a short distance over to the Meta House. Blackbird arrived first, followed by The Watchman with his son and heir apparent, Wonder Boy. Wonder Boy has traditionally joined Watchman for his holiday charity events.

We had several bags of art supplies and toys. We were met outside of Meta House by two staff members, and led inside into their office. The Meta House is located in a couple of beautiful old buildings that used to house a Catholic school and convent for nuns. As we walked through the halls we encountered some of the Meta House residents who reacted with delighted surprise at the sight of the superheroes patrolling the hall.

The kids of Meta House were all in school, but after dropping of the supplies, the Meta House staff suggested the superheroes stop in the basement to say hi to some of the women who were having some social/ craft time. We filed down the narrow stairway and were met with more surprise. The Watchman briefly told the women what being a RLSH was all about and was greeted with great enthusiasm and well wishes. We wished the residents and staff a happy holiday and left.

Outside of the Gingerbread House

On Sunday I found myself cruising on the highway through the forests of bare winter trees, billboards, and outlet stores in the Birdmobile, with dance mash ups bumping on the stereo. I was riding with Blackbird as we headed to meet The Watchman in West Bend to make the second donation. The Gingerbread House is a charity that gives donated toys to poor families in Washington County. Again, we had several large bags of toys that filled up one of Gingerbread House's bins in their makeshift warehouse facility. The Gingerbread House staff was very kind and gave us each a Christmas card. They said it has been a rough year and any donations were very helpful.

The heroes talk with Gingerbread House staff inside their facility

Geist and Arctic Knight with donations for People Serving People

In Minneapolis, The Watchman's Great Lake Alliance team mates- Geist and Razorhawk, along with Minneapolis's newest RLSH addition, Arctic Knight also did a delivery over the weekend. The trio dropped off toys and food at People Serving People, a large shelter and facility in downtown Minneapolis. They also read Frosty the Snowman to kids who reside in the shelter.

And so, the superheroes did what they could to try to capture the holiday spirit and give to others, and helped out three charity organizations. Good work!

HOLIDAY BREAK...
I will be taking a holiday break from Heroes in the Night to try to catch up on some other facts of life and will return to this blog January 5. I hope all of you have a great holiday, no matter if you are a hero doing a Christmas or New Year hand out or whether you are a sinister villain plotting during Ubermas, happy holidays to all.
Posted by Tea Krulos at 3:31 PM