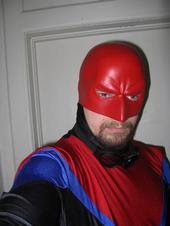 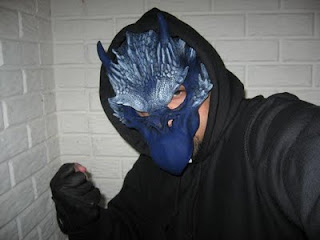 By Tea Krulos (This article appeared in a slightly different form in the September 2009 issue of Milwaukee magazine.)

It was a frigid 9 degrees on March 1, chilling me as I paced through Gordon Park. It was just after sunset, and I was waiting to meet one of Wisconsin’s own superheroes, The Watchman.
The Watchman pulled up to the park, not in a high tech Batmobile, but a pretty normal looking four door Pontiac. He exited his car and began walking through the empty park toward me, and for those first strange moments I felt somewhat unprepared to interview a costumed crime fighter.
He extended a motorcycle gloved hand to me in greeting. The rest of his costume includes a simple domino mask, a red hooded sweat shirt with The Watchman logo stenciled on it, army boots, and a black trench coat.
The Watchman is part of an expanding group of people across the nation and world calling themselves “Real Life Superheroes” (often referred to as “RLSHs”). These people are living out their dreams of adopting costumed personas and hitting the streets anxious to thwart evil.
Watchman said his name is not directly inspired by Alan Moore’s social superhero epic comic (and now movie) Watchmen, but admitted the graphic novel is a “RLSH Bible.”
We began to stroll around the perimeter of the park, and as Watchman told me about his double life, the only sound was the faint noise of traffic in the background, and the crunching of ice under our feet.
“I’d like people to think, hey, maybe these people are doing good, and take notice and hopefully get a little inspiration. Not necessarily to dress up and go out the way we are, but to do something.” Watchman explained, as we passed the park’s playground. The swings were creaking in the wind. He continued,
“You know if everybody made little changes in what they did, gave more to charity and watched out for their neighbors a little more, we would not have as many problems as we have. That is what we’re trying to accomplish.”
Watchman admits that “most patrols are pretty uneventful,” but adds that “from time to time something comes up.”
On one of his patrols he encountered a group of teens tagging a building with graffiti and trying to break into the building’s shed. The Watchman appeared in the night and “scared him off,” he said.
The Watchman found himself in a bad situation when he got a tip about an underage party on the south side and decided to stake it out.
“I normally leave parties alone. I was a kid once, too, but I like to check up on them sometimes to make sure they aren’t out of control.” He said.
The Watchman saw a group of four or five guys leaving the party with a girl, probably about 15, said Watchman. He sensed trouble.
“It was pretty apparent the girl had too much to drink and the guys were trying to take advantage of the situation, so I intervened.”
The girl’s brother came out of the party to check on her, and when he saw the Watchman he mistook him for the villain and pulled out a knife, according to Watchman. Watchman jumped in his car and took off. Later, from a distance, he saw the girl leave the party with her brother.
“I was mad at how it all went down but I remind myself that at least for that night, the girl probably just ended up with a bad hangover instead of being date raped.”
The Watchman helped form a league of Midwest RLSHs, called the Great Lakes Heroes Guild, which now claims approximately 14 members. The leader of the group is Razorhawk, of Minneapolis, who also runs a website, hero-gear.net. The site creates modestly priced costumes for RLSHs and business is booming as Razorhawk has filled orders for heroes across the nation and beyond.
The group’s first mission was to donate toys to charity groups for Christmas. Watchman participated and made a rare public appearance by donating toys to a charity called the Gingerbread House.
Hoping to join these ranks is Milwaukee’s own MoonDragon, who has just begun to get a feel for his double life, putting on the mask for the first time a month previous to my meeting him. Watchman says he has been patrolling for years, and he met MoonDragon “mask to mask” to join him on patrol and offer his advice.
It is 5 days after my meeting with Watchman and 50 degrees warmer when I join MoonDragon on the busy intersection of National and Layton. I am joining him for a foot patrol of the area between 19th and 27th on National, through the alleys and side streets and Mitchell Park.
MoonDragon was wearing a ski mask with lightning bolts on it, a black hooded sweatshirt, and army boots. Watchman and MoonDragon have “toned down” versions of their costumes for street patrol, and flashier spandex costumes with capes and more elaborate masks for charity events and other public appearances.
Both heroes carry a practical arsenal, a can of pepper spray, note pad, flashlight, digital camera, and first aid kit. MoonDragon is also planning on carrying a pair of eskrimas, a Filipino fighting sticks made of rattan.
It is a quiet night. There is a small group of boys playing soccer in the park, and an old man sitting with his dog at a park bench. They give us a curious look.
“Sometimes I’ll be hanging around with my friends, having a beer and I’ll be thinking to myself- I should be out there right now.” MoonDragon tells me as we turn into an alleyway. He says as of now, none of his friends, no one in fact, knows his secret. Not even his fiancée.
“I will have to tell her soon though.” MoonDragon says. “Maybe I’ll just nonchalantly make an offhand remark about patrolling the streets at night in a cape and mask.”
Posted by Tea Krulos at 5:29 PM