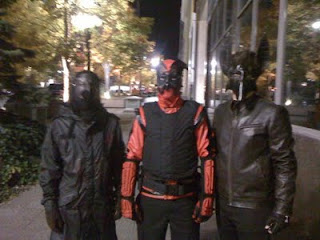 The Black Monday Society is a RLSH team based out of Salt Lake City. They were founded and led by Insignis, a tattoo artist who transformed his tattoo shop into a team headquarters of sorts. The team, whose membership peaked at ten or so members, become well known for their signature ghoulish look.

Leadership was recently passed to Red Voltage, and Heroes in the Night recently got him to talk about his new role via e-mail.

First, he tells of how he got involved with the group in the first place:

"It all started last year, my first patrol was a spontaneous meet with another new comer, Professor Midnight. Now we've patrolled together at least fifty times if not more. I started in April 2010 and plan to do this until I can't any longer...in fact I'm getting my Black Monday Society tattoo next week, finally. I'm pretty much the last to get it, haha. so after I had patrolled a few times with professor midnight we eventually met the BMS. I think Insignis' first impression of both Midnight and myself was pretty good for new comers we both had good heads on our shoulders and had a similar idea as to what the patrolling thing was all about! After over ten patrols I think Insignis felt we were trustworthy and he extended his hand out with an invitation to join the BMS."

Red Voltage goes on to describe Insignis' role in the group, and the traditional Black Monday Society tattoo:

"Insignis is the traditional mentor trainer/leader, he is all about being the main man, he does everything for the group, and you go to him for your everything, from adding new guys, to your look, to your BMS tattoo. The Tattoo is a traditional BMS thing, you basically should be repping the tattoo if your in the group, so some of the other guys have been harping on me to get mine, but I finally came up with the right design."

"After loads of fun patrols, some that get your adrenaline going, some that touch your heart, and some that just feel inspiring, I have finally made it to this point in my RLSH career so to speak, but I don't think of this as anything other than a duty of mine, cause I can, cause I believe in it and I am crazy enough to do it, just like my team, we all share that opinion. We are all crazy."

"Like Insignis once said, "you go around dressed in a mask and a cape...its a special breed of stupid, but it works" and its kinda like that, but its driven by the heart and the love of justice, its one my life passions, and sadly it might be some of the best times of our lives, but I guess that is why the tattoo is going to mean so much to me, just like my team and what we do."

Red Voltage describes the transfer of the leadership role:

"So just recently on one of my days off work, I was still sleeping in my bed, sun peering in through the window well, and I feel my phone buzz which is the final push to wake me up for the day, I look at the text message which happens to be from Insignis, he tells me that the BMS is mine and that I have earned it."

"I was surprised and shocked to get the message with my initial reaction of panic, and I was worried about Insignis, wanted to be sure he was okay, he was. To him it was just the time to hand the mantle over to the person he trusts, and I think he sees himself in me. We both occupy lots of our time focusing our creative energy on creative things, He taught me his craft for making the ABS masks, I have since taken on some of the communities mask making, I have made Voodoo's Mask and I am working on Bearman's. I naturally also have the ability to talk to people while getting out the right message, he wants someone who can talk as good as he does, which isn't really possible, but I try."

And when asked what the near future holds for the BMS, Red Voltage explains:

"My big plans are mostly some local events, like charity raising events such as Bowling with the Black Monday Society. I also want to get some of the guys together to help sandbag around here, since the snow is melting off the mountains, we wanna prevent flooding, and people need that right now!

I am just sticking to it and trying to do the best I can for the team and the community as well as SLC and its needs."