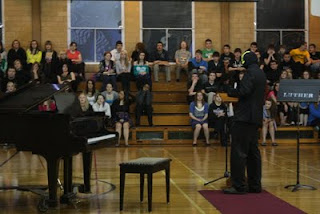 A rare photo of Anonyman, addressing students at Luther College in Regina

On June 2nd, Anonyman, a RLSH from Saskatoon spoke and presented a power point presentation for students of Luther College in Regina. Anonyman had befriended a student who has a father that teaches at Luther, and it was through them that the appearance was made.

Anonyman's power point led students through the history of RLSH, the New York Initiative, Canadian RLSH, and specifically Vancouver RLSH Thanatos' challenge to help ten people out by the end of June. Heroes in the Night reported on this challenge HERE and you can find another page for the challenge here:maskandmachine.tumblr.com/post/6025438512/thanatos-is-a-real-life-superhero-or-a-rlsh

"When I first entered the auditorium there were loud murmers throughout the audience, but once (my friend Isaac) introduced me they quieted down." Anonyman says of his campus reception. "They were respectful during my presentation, and even laughed at my lame jokes (i.e. I want you to go out and touch ten people. Well, maybe not touch. Help.) When the presentation was over, there was a loud applause from both students and teachers."

Besides the presentation, Anonyman plans to participate in the Thanatos Challenge by patrolling the streets in between working.

"Operation Jurassic Park is a drive looking to create care packages for deployed service members." Explains Red Dragon, of Seattle. "I was inspired by a soldier who is currently deployed in Iraq named Cody Tyra. After talking to the soldier for a few days, I wanted to send those troops some comfort...if for no other reason than I know what it meant to me when I received something while I was there."

Red Dragon says the name of the operation comes from Tyra's unit, Alpha Company 62nd ESB, which is called "The Raptors."
"It seemed fitting to name the Operation after the unit that inspired it." Red Dragon says. "Spc. Cody Tyra wrote me one day and talked about how he loved what we were doing. After a bit I wanted to send him something, but then thought that it would be better to send some gifts of comfort to his whole unit...and more if possible. I wanted to do something special for people that give up just about everything to make the world a better place for complete strangers."

Red Dragon says people not in the Seattle area can contact him for ways to help via his Facebook or at red.dragon.legion@gmail.com.

You can find a Facebook event page for the operation by doing a search for "Operation Jurassic Park."
Posted by Tea Krulos at 10:34 AM