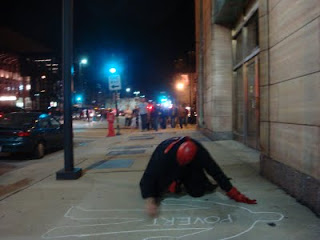 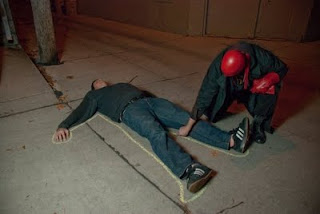 (This article was originally published in the December 2009 issue of the Riverwest Currents, which is a Milwaukee community newspaper. Above by Tea Krulos, bottom photo by Paul Kjelland.)

THE WATCHMAN is a “real life superhero,” a growing movement of people who adopt costumed comic book -style personas. These people do charity events and safety patrols of their neighborhood, looking for criminal activity.

Patrolling with the Real Life Superheroes
I first met the Watchman last March. I was writing a profile on him for Milwaukee magazine, and we met on a cold night in Gordon Park. Since then, I’ve met up with him several times. I joined him and his colleague MoonDragon, also of Milwaukee, for a patrol of National Avenue on June 12. MoonDragon patrols National Avenue, and wanted to patrol an area where two Milwaukee police officers had been shot a couple days earlier.
The Watchman and I cruised up to Minneapolis on June 27 in the Watchmanmobile to meet his Great Lakes Heroes Guild teammates Razorhawk, Geist, and Celtic Viking. Our meet up spot was the statue of Mary Tyler Moore. We patrolled the streets, and dropped off food at People Serving People. The sun was rising as we headed toward the Wisconsin state line.
The Watchman also lent his time to patrol Riverwest during the Riverwest 24 bicycle race on July 24. He patrolled on foot and by car, keeping a watchful for anything hazardous that might disturb the cyclists.
We have also been interviewed twice. The first time was in July and was for a possible real life superhero reality show being developed by a production company. The second time was this November for a segment on FOX 6 News at 9.

Messages in Chalk
My latest adventure with Watchman, was on November 7- he had a plan for a bit of public art. He picked me up, wearing his new costume: a red rubber mask, red leather gloves, spandex shirt with his logo on it, and a black trench coat. He had a bucket of sidewalk chalk. The idea for this night’s project came from one of his superhero colleagues.
“I came up with the idea after reading something on the Heroes Network forum, posted by Thanatos.”Watchman told me.
The Heroes Network is a site where RLSHs share information and ideas. Thanatos is the green skull masked RLSH of Vancouver. Thanatos suggested that RLSHs go out and create chalk outlines, like one you would find at a murder scene, and then label it with the fatal ills of society.

Lying on the Sidewalk
We set off, with me lying on the concrete and The Watchman doing the chalk work. In the alley behind Stonefly, we left an outline with the word GREED in it. DRUGS was left near the marsupial bridge underneath Holton Street.
We left two in Cathedral Square Park, GANG VIOLENCE and DOMESTIC ABUSE. We chalked two on the river walk, near Wisconsin ave, and Wells street, ALCOHOL ABUSE and CHILD ABUSE. We left the last one outside the Journal Sentinel building on 4th street, labeled POVERTY. We finished this one in the nick of time. A Bucks game had just let out across the street at the Bradley Center, and Watchman was just lettering the “Y” in poverty as the light turned green, and a large group of people began to walk over the outline. Some looked startled or confused; some didn’t seem to react at all.

Worth Trying
“Hopefully people see it. I guess I hope that even if it wakes just a little bit inside of them and makes them think enough about it to make them change something in their lives or help prevent any of those things, then I think it was successful. This is one of those cases were we aren’t going to know if it does any good, but it’s worth trying.”
Watchman’s team, the Great Lakes Heroes Guild will raise money for Christmas toy charities for the second year in a row. In addition to charities in Minneapolis and Florida, The Watchman will use his share of funds raised to bring toys to the Gingerbread House charity in West Bend, WI.

You can help these heroes out with this great cause, by donating funds at: glhg.webs.com/psptoydrive.htm

Below: Video produced by The Watchman chronicling the outlines.