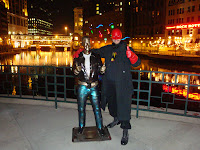 (Normally I will be posting one of these every Thursday, but seeing as tomorrow is a holiday, I thought I'd post the first one today.)

Operates out of: Milwaukee, WI aka “Brew City”
Group affiliation: Great Lakes Heroes Guild
Sidekicks: The Watchdog joins on some patrols. Wonder Boy may appear at future charity events.
Current Activities: Charity work and safety patrols
Quote: “When I first started out, I avoided the police like the plague. I was a bit paranoid about being treated like a nut. It is what I would have thought if I saw somebody running around like I was, so I understand that. I just didn't want to have to deal with it. Anything I reported to them was done either anonymously, or as "_____ _____", the guy behind the mask. I figured it would work better than calling 911 and saying ‘This is The Watchman, and I'd like to report a crime.’ Imagine being that operator.”

Additional author notes: Obviously, as you can see from previous blog entries, The Watchman is the beginning and a key part of my book. He introduced me to the scene. I've met with him several times and talk to him on a regular basis, and so it makes sense to start with him as my first featured hero. I admire The Watchman's dedication and he recently had a great feature on him on the local FOX news affiliate, pasted below: