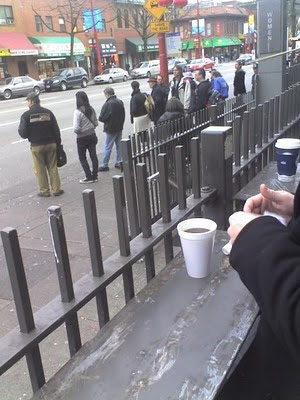 Photo by Thanatos
Ok- again need to do the short version. I meant to post this last night, but the internet connection here at the hostel isn’t so great. Other than that it’s not a bad place. Oh, well that and the fact that one of my room mates plots and laughs maniacally in his sleep, despite his friends throwing water bottles and balled up socks at him like baseballs.

After breakfast I waited outside, waiting for the crew to show up. There’s a nice view of the mountains as I kept an eye open for the Thana-van, with the Thanatos logo in the window.

Thanatos, Motor-Mouth, Knight Owl and I started by doing an undercover walk around of the Main and Hastings area I talked about yesterday. Guess what? Things didn’t get better overnight. We walked the streets and desperation was everywhere. In one of the most humbling moments, we entered the Carnegie Community Center, located in a former library. In the basement, we got Styrofoam cups of coffee for 60 cents, then went to the courtyard for a front row view of Main and Hastings. Mobs of desperate people, running and selling drugs out in the open. Block long lines waiting to get lunch at the Salvation Army.

From there we headed to Chinatown to meet up with Victim at the beautiful Chinese gardens at Dr. Sun Yat Sen Park. While we’re waiting, me Knight Owl and Motor-Mouth check out Dragons martial art supply store, where Motor-Mouth is seriously tempted to buy a pair of butterfly knives.
At the gardens, Thanatos masks up and meets Victim. Victim describes himself as a "gadgeteer" and a RLSH tech support, although he’d like to gear up by Superheroes Anonymous 4 in Portland.
A light rain picks up.

We head back to Knight Owl’s efficiency, which Motor dubs the “Owl Hutch.” There they suit up for a patrol which will have the documentary crew with them.
It’s a semi-industrial area, quiet for the most part. Thanatos hands out power bars to people he sees. At one point he goes into Victim’s backpack to get a fresh supply in front of a laundry mat. An Asian woman sitting inside waiting for laundry takes in the scene, a mystified look on her face.
We stop at an overpass to look at a squalid empty lot below, abandoned shopping carts tipped over. A prostitute with a pink umbrella and white thigh high boots walks the street below. She looks up and sees us, and gives a curtsy bow.

After this we get dinner at White Dot, kind of a Canadian version of Denny’s.
We head downtown. And almost immediately meet police officers on bicycles. They’re concerned because there was a recent appearance by the anarchist black bloc who smashed window fronts in Vancouver in protest of the Olympics.
“I think it’s the wrong time to do this with masks. The crowd might get the wrong idea and if there’s drunk people, they might be a target themselves.” An officer tells me.
Thanatos and Motor-Mouth heed the officer’s advice and decide to do the patrol maskless. Drunken revelers are everywhere. A curious crowd, drawn by the documentary crew, asks questions and the RLSH try to answer.
We run into a celebratory pyrotechnics and lazer show, take it in and then walk back. Thanatos drops me off at my hostel.
More to follow.
Posted by Tea Krulos at 7:17 AM