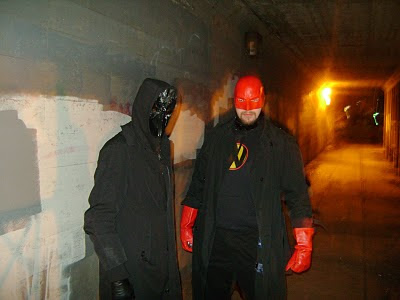 (Blackbird (Left) and The Watchman)

The sky is like cloudy cotton candy dropped in a rain puddle. It’s an artificial color- lit up by the strong lights of the industrial park in the background. Giant streams of smoke billow lazily from the tannery behind Becher Street. Milwaukee is cold and silent this time of year.
The Watchman has picked me up in the Watchmanmobile, driving us down to a neighborhood on the South side of Milwaukee known as Bay View. During the short drive, he shows me maps he has printed off from the site Spot Crime, which maps out recently reported crime with a series of icons.

We park and head to Becher Street on foot, heading to a meet up spot where we are destined to meet Milwaukee’s newest masked adventurer, Blackbird. Besides Watchman and Blackbird, there is a third Milwaukee “real life superhero” (RLSH) named Raptor, who is unable to make it out this evening.
I get a call from Blackbird, and we meet up with him in front of an old, abandoned corner bar, the Nautical Inn. The lettering on the sign is so faded you can hardly read it, and there is no sign of life. It’s Saturday night, but you would never guess that here, it’s like a ghost town. The air is silent except for the hum of industry in the nearby factories.

Blackbird shakes our hands, under a street light, which reflects off of his black mask. He speaks in a low, even keel, muffled voice.
The sculpted mask covers his face entirely, hiding all emotions. The eyes are reflective and molded in a pinched look staring down his beak. He is tall, wiry, and lean. He wears a black hoodie, pulled over up on his head, a light black trench coat and some tall black leather boots, a red scarf wrapped around his neck.
It’s a spooky look and also reminds me of the great Edward Gorey’s birdlike, scarf wearing creature in his book The Doubtful Guest, scratched out in illustration by Gorey’s Gothic hand.

The plan is to patrol Bay View and nearby Walker’s Point. I’m familiar with both of these neighborhoods. I have friends in both areas, and my work as a freelancer has brought me through frequently.
We head toward the Milwaukee Solvay Coke and Gas site, 46 acres of industrial wasteland. Most of it is fenced off, demolished buildings from when the Environmental Protection Agency did a hazardous waste removal in 2003. The former administrative building faces the street, at a dead end near the train tracks, on the other side of a dark highway overpass, dripping water from melting ice. It’s boarded up and covered in graffiti. Trash blows everywhere and sits in piles in an abandoned lot across the street from the building. Someone has dumped a truckload of newspaper inserts in plastic bags right on the sidewalk.

As I talk to Blackbird about my writing, Watchman puts in a call to his Great Lakes Heroes Guild team mates, Razorhawk and Geist, who are patrolling the streets of Minneapolis with a new real life superhero, Golden Valkyrie. There’s been a series of violent muggings in recent weeks, and they’re patrolling the area.
Watchman calls in a couple times. It’s not just to say hi, it’s also a dual safety check- in to make sure everything is going alright for both crews. All is well in Minneapolis.
We leave the industrial mess behind and cross a bridge over the Kinnickinnic River, heading to the nearby neighborhood of Walker’s Point. Our destination is one of the major streets of this side of town, National Avenue. I’ve been on patrol in this area with Watchman and MoonDragon before.

Walker’s Point, like Bay View, is a random mix of commercial, residential, and industrial areas and has an interesting mix of cultures. Most of Milwaukee’s gay bars are located in the area, and the city’s largest Hispanic population is centered here, as well as working class families that have lived in the neighborhood for generations. The result is an odd mix of establishments. The Green Bay Packer loving, working class bar Steny’s Tavern is just a block from La Cage, famous for their drag queen shows. The Gold Coast strip club is just a couple blocks away from the home of the Milwaukee Ballet.

Blackbird shows us a couple of spots he’s been staking out.
“This would be a good place to nest- excuse the pun.” He says as we stand in the shadows near a bar on a back street. It’s poorly lit and surrounded by giant warehouses. There are a lot of parked cars and drunken revelers, unaware of the masked men nearby.
Blackbird also takes us to a small park. He’s done a stake out here before, even preventing a car break in, he says. He was tipped off about it when he began hearing about multiple car break -ins and a mugging all on this same block. It’s not far off National, and has a steady stream of fresh targets as people constantly park on this block throughout the night in proximity to the nightlife nearby. We hang around the park awhile while Watchman gives Blackbird the low down on stuff going on in the RLSH scene.

As we head back toward Bay View, we’ve picked up attention from the police. A couple have driven by slowly, but none have stopped.
We walk by the Allen Bradley clock tower, a giant, illuminated four sided clock, resting high above the giant factory. It is now close to striking 1:30 AM. The clock is one of the most recognizable landmarks of this neighborhood. The neighborhood used to be mostly working class Polish, which led to the clock tower being nicknamed “the Polish moon.” As we walk through Allen Bradley’s large complex, a Milwaukee Police squad drives by really slowly, crawling by. We keep walking. We take a left and walk a couple blocks.

Watchman is explaining how he has never been stopped by the police, when another squad crawls by slowly, then turns around and pulls up, parking on an angle near us.
“What’s with the masks?” A female officer asks out of her car window. She has a wary smile. Her partner, a gruff looking male, stares at us, frowning.
It seems like she thinks we are on a destination- maybe a late night costume party. When Watchman says they are just walking around, keeping an eye on things, both officers get out of the squad.
“I need you to take the masks off.” The male cop says.
“What- really?” Blackbird says.
“Yeah really. Masks off and I need to see IDs.” Something Watchman has told me many times, is that he will always cooperate with police. The two remove their masks, their hair messy. Blackbird is somewhat surprised that under the mask; Watchman is…[DESCRIPTIONS DELETED].

It is both officers’ first experience with an RLSH.
I tell the officers I am a writer and hand in my ID. The male officer goes to the squad to puzzle them out. Meanwhile, Watchman tells the female officer a little bit more about what he is doing out on the street. She seems a bit relieved that they’re looking to report trouble instead of instigating it and she warms up after her initial bafflement, although she still seems to be not sure what to make of it.

When Watchman explains they are just two concerned citizens who want to help, the officer smiles. She tells them it is okay for them to wear the masks, the officers just had no idea what was going on.
“Well. God bless ya, guys.” She says, asking them to be careful. Her partner hands back the IDs and shrugs.

The masks back in place, we continue on back toward Bay View. The rest of the walk is pretty uneventful. We part ways with Blackbird at the Nautical Inn, and Watchman drives me home. He is glad to make another RLSH connection here in the Brew City, and visualizes a day when there will be enough Milwaukee mystery men to form a group that can work as a team on the street as well as becoming a non-profit charity organization.
More photos from the patrol at the Heroes in the Night MySpace
Posted by Tea Krulos at 4:23 PM