THE WATCHMAN GOES TO CAMPUS 2 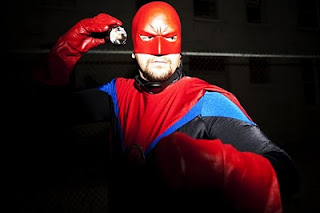 In a report posted here at the beginning of the month, I detailed the college craze for local RLSH The Watchman and Blackbird. They appeared in a front page story for Marquette University's student newspaper, the Marquette Tribune. They also appeared in a segment for the University of Wisconsin-Milwaukee's campus news program PantherVision. They were interviewed for radio station 88.9FM Radio Milwaukee (I'm being told there were production delays on that, but it might yet appear in the future.)

The UWM Post, UWM's student newspaper, has also picked up the story in a special Riverwest themed issue of the paper that came out today. "Real Life Superheroes- The Watchman Patrols Riverwest," was written by staff writer Kevin Kaber and I think he did a good job with the article. He keeps it light-hearted but not insulting, shares who these guys are at a glance pretty well, and includes a quote from yours truly. It's also great to see the guys included amidst the other articles on interesting things going on in Riverwest.

The print version has an additional gag that the online version doesn't. The article ends "As for his secret identity? Obviously The Watchman is (See WATCHMAN page 21)"

After flipping through the pages in confusion, you realize there is no page 21 (the paper is only 16 pages) and that the UWM Post has been pulling your leg as you look for a reveal that doesn't exist. It fooled me and caused me to LOL, so well done!

You can read the article HERE.

I got a chance to hang with The Watchman and Blackbird last night. Before we went on a patrol in Blackbird's Birdmobile (it was a quiet patrol while I was with them, after they dropped me off they encountered a suspicious vehicle and reported it to a police officer they found nearby) we discussed strategy in taking part in the Great Lakes Alliance annual holiday toy drive.

We will be donating the toys to at least two (maybe three) Wisconsin charities. We will be setting up a time and location for people to drop off toys and meet the heroes in person here in Riverwest. People can also donate funds online at the GLA's website HERE.

Updates on this mission will be posted throughout December.
Posted by Tea Krulos at 4:00 PM