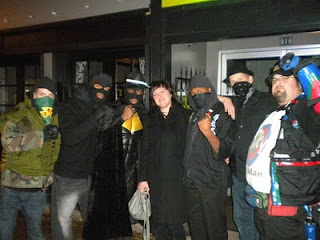 Seattle superheroes have hit the news in a big way over the last week as the Seattle media (and beyond) have gone into a feeding frenzy over the Rain City Superhero Movement, a new group of Seattle RLSH who seemingly have appeared out of thin air. Who are these people? That is something everyone, including the RLSH community, are still trying to figure out.

Seattle actually has a RLSH history that goes back several years and has an interesting cast of characters. My observations on these guys are mostly based on online interactions I’ve seen and from watching episodes of www.Zetaman.tv, which revolves around Portland superhero Zetaman, and his team The Alternates composed of Portland and Seattle RLSHs. A few episodes were filmed of group meet ups in Seattle.

In those episodes, we are introduced to Neurocybe’X (status unknown), who is by all accounts, including video footage-is an oddball. He claims to be a some order of jedi knight, with a working knowledge of ice planet Hoth.

Black Knight (Retired-also went by many other different names) had a dramatic falling out and retirement from the Real Life Superhero community,for reasons a bit complex to get into here.

Mr. Ravenblade and The Dreamer, both still active, have very different looks and methods- Mr. Ravenblade is clad in all black and actively does crime patrols. Dreamer has a bright blue and white motif and seems to focus more on charity events and such. The Alternates briefly disbanded after the falling out with Black Knight, and now list The Dreamer as their sole Seattle represenative.

More RLSH began to appear- The Irishman, who I met on a trip to the West Coast, White Baron, who joined Mr. Ravenblade and Black Knight on a patrol, and Sky Man, relatively new and eager to participate. This newer crew has done patrols and things like a water handout (which I wrote about HERE).

My Trip to Seattle

In February I joined RLSHs for a meet up in Vancouver during the 2010 Winter Olympics, hosted by Thanatos. After the meet up, I found I had an extra day or two free before I needed to be home and decided to check out Seattle. I joined The Irishman in a Greyhound trip from Vancouver to Seattle. The next day I joined Irishman for a walking and driving patrol of the downtown area.

I also had the opportunity to meet four members of the “real life supervillains” organization ROACH, at their West Coast HQ- a gourmet hot dog stand called Po’ Dogs. Real life supervillains are people who mock RLSHs online. I felt it was important, journalistically, to hear an opposing point of view.

I wasn’t able to meet up with the other Seattle RLSH at the time.

After returning home, I decided I would try to pitch an article to a Vancouver or Seattle publication about my adventure. This concept had been successful after I attended Superheroes Anonymous 3, in New Bedford- I was able to land a good sized article in the Boston Phoenix, and would again prove to be a success after my trip to New York, with a cover article in the New York Press. These were win-wins- I got to write an early draft of part of the book, see it in print, and get a little bit of money to help with the travel costs. Pitching the Vancouver story was a bust, though.

After getting no response from a couple of publications (which is really, really annoying) the Seattle Weekly gave a reluctant response.

The editor then suggested I hand the story over to them so they could assign it to a staff writer who would meet up with the RLSHs and join them on patrol. In exchange, they would give me a modest amount of money to offer my insight to the writer and get him in touch with the Seattle RLSH. I thought about it for awhile and then decided to go with the offer. I would still be part of the story in an advisory role, and would get some money reimbursed from what was a somewhat expensive trip.
I spoke with the writer, the writer spoke with the RLSH, and for whatever reason, the story flatlined and never happened, and I never got paid. And that, folks, is the glamorous life of a freelance writer.

The Rain City Superheroes have adopted the RLSH concept to fit into their own group in their own style and have had little association with the larger RLSH community, something that has caused some alarm and frustration from established RLSH who are being tied to the group. The group is led by a young man named Phoenix Jones. Other confirmed members include Buster Doe, No Name, Dee, and Troop.
More alleged members are listed as Thorn, Green Reaper, Gemini, Catastrophe, Thunder 88, and Penelope.

Rain City has what I’ll call a “minimalist” look- Phoenix Jones has a mask, fedora, and chest piece but the rest of his crew simply wears ski masks and bandannas. This look has gotten them in some small trouble- they’ve been reported to police as robbers at least once.

Emotions have flared over the group and the media representation of them, in particular with the established Seattle RLSH. Some have tried to reach out and communicate, while others have denounced them as “liars” and “posers” who have fabricated who they are for “street cred.”
Several items in the flood of news reports raise alarm bells as well.

As the Seattle PI site reports:
“In one instance, police say a caped crusader dressed in black was nearly shot when he came running out of a dark park. In another case, a witness on Capitol Hill saw the crusaders wearing ski masks in a car parked at a Shell station and thought they were going to rob the place.”

It also reports police found the group confronting a violent man using a golf club as a weapon.
“Police took the golf club as evidence. The "costume-wearing complainants" refused to press charges because they didn't want to identify themselves to officers,(department spokesman)Kappel said. So the suspect walked.” Phoenix Jones addresses these issues in an interview that follows this entry.

On a more positive note, the article does report that Phoenix Jones did go to police headquarters to talk to the police there in person.

Komo News also reports:
“Phoenix says police were extremely wary at first, but now accept his help. He says he calls them ahead of time to tell them which neighborhood he’ll be patrolling. He fills out police reports and gives witness testimony.”

Particularly vocal in deriding Phoenix Jones and company, is the aforementioned Seattle RLSH Mr. Ravenblade, who issued an open letter to Jones on his LiveJournal. In addition, he wrote an entry titled “Real Real Life Superheroes Follow Through And Don’t Wimp Out,” and in that entry, Mr. Ravenblade says:

“The fact is, This "Phoenix Jones" guy is a fake hero. A wolf in sheep's clothing, and I really want to do my best to protect people from people like him that are OK with criminals walking the streets able to hurt people. He talks the super hero talk, but he does not walk the super hero walk.”
You can read the entry in its entirety on his LiveJournal page HERE.

This in turn prompted New Jersey RLSH Phantom Zero to issue his own open letter in reaction, posted on his Facebook. He starts it by saying:
“Recently, you've come to my attention. Because of this, I began questioning someone who has made strong, but baseless, claims.
I believe he hates you and very much resents you. This individual is acting in a highly subjective and emotional manner, and I believe this person's negative emotions stem from personal reasons: primarily jealousy over you getting press attention while he, feeling entitled because of his assumed seniority, while he himself is being completely ignored (despite being in roughly the same geographic area).”

You can read that letter in it’s entirety HERE.

The most proactive person in communicating with the Rain City Superheroes has been Seattle’s own Sky Man. Sky Man has taken a diplomatic approach, meeting with Jones and company three times over the weekend, joining them on patrol , and trying to make sense of the whole thing. After patrols Friday and Saturday, Sky Man says Phoenix Jones and crew blindfolded him on Sunday and took him to a secret hangout spot. It was there that they discussed RLSH politics while enjoying a snack of pudding.

I have been informed that an additional newscast featuring the group will be out soon.

To break journalistic character for a moment here, I have to say this is all very strange and I don’t quite know what to make of it, and where Phoenix Jones and company fit into the scheme of things. But I thought a logical next step would be to interview the man himself, and look at some of the media surrounding him, which you will see in parts 2 and 3 of this write up.
Posted by Tea Krulos at 4:50 PM