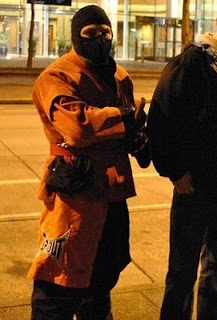 Operates out of: Seattle

Quote: "The reason I chose red is because it's the color of my kurtka and the rest of my fight gear. Also, red has a significance between me and my friends. The reason I chose the dragon is a little more private...but it is a symbol that the same friends and I carry."

Author's notes: Red Dragon has developed into a figure that has become an ambassador between his group, the Rain City Superheroes, and the larger RLSH movement. He also recently appeared next to his team mates Phoenix Jones and Buster Doe on a Good Morning America segment (HERE) and more media will appear in the near future.
Posted by Tea Krulos at 11:49 AM