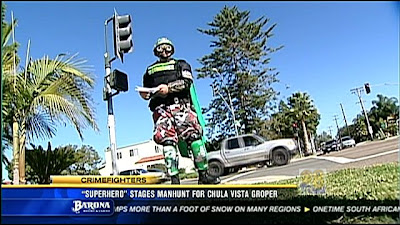 Mr. Xtreme has his giant eyeballs looking out for the Chula Vista Groper

Mr. Xtreme, of San Diego, spent a couple days last week at the Slamdance film festivel, helping promote the documentary film Superheroes, which follows him and other Real Life Superheroes around the country. (See write up HERE)

A report on the effort can be found at CBS Channel 8, San Diego at the link below.

The three reports have differences, yet are similar in tone.
Posted by Tea Krulos at 9:51 PM