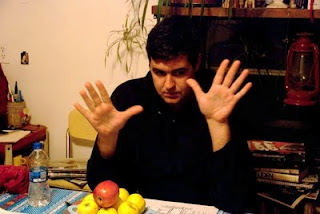 I get asked this a lot, so I thought it was time for an update on Heroes in the Night.

When I first started serious work on this in April 2009, I was very naive and thought I would be cranking out a book on Real Life Superheroes in six months, nine months. Yes, I could have done that, but it would have been a total joke book. I decided I needed to take the proper amount of time to do the book right, however long that may be- 2 years, 3 years, 5 years whatever.

I could go into all kinds of reasoning, but it can be summed up by this- its my first book and I don't want it to suck.

This has all been quite a challenge because the RLSH story is a very quickly evolving one. Looking at stuff I wrote a year ago looks highly outdated in areas. A few months ago I began rewriting the chapters so they are more streamline, readable, and updated. I have finished the drafts for the first six chapters. The first four are currently being edited by a mentor to me, Jan, the editor of the Riverwest Currents. When these have been edited I will be making another (my third) round of trying to sell the book.

I will unveil these first six chapters and a brief synopsis:

I describe my first meeting with The Watchman in a frozen city park and give an overview of who the RLSH are.

Ch. 1- OUT ON THE STREETS
I recall my early meetings patrolling with The Watchman, and go more in depth into who he is, and also my meeting the man known as MoonDragon.

Ch. 2- AMERICAN SUPERHERO
This chapter talks about the influence of superheroes on our culture and examines them as an American mythology. I write a bit about the Golden Age of comics, Alan Moore and Watchmen, Batman and other heroes, and discuss "comic book revisionism" with Flaming Carrot/ Mystery Men creator Bob Burden. I also talk about some non comic book related stuff, like 9/11 and Kitty Genovese.

Ch. 3- EARLY PROTOTYPES
The secret history of RLSH is discovered in this tour of a dozen people who created their own costumed personas from 1969- the early 2000s.

Ch. 4- BOYSCOUTS AND BATMEN
This chapter looks at opposite ends of the spectrum- "costumed activists" and "crimefighters," both groups that distance themselves from the term "RLSH." Several people from both groups are described briefly. Also, author Tea Krulos finds himself in an odd situation in Washington DC.

Ch. 5- THE GREAT LAKES ALLIANCE
Back in the Midwest, I recall my meeting with Razorhawk and Celtic Viking in Saint Paul to search for a missing college student, a rolling patrol with Geist through the streets of Rochester, and a GLA meet up in dowtown Minneapolis.

Ch. 6- THE SECRET CITY
This is mainly an account of my weekend at the Superheroes Anonymous 3 conference in New Bedford, Massachusetts in September 2009.

And now I am moving on to revisit Chapter 7. Let's keep those doggies rollin'!
Posted by Tea Krulos at 4:24 PM