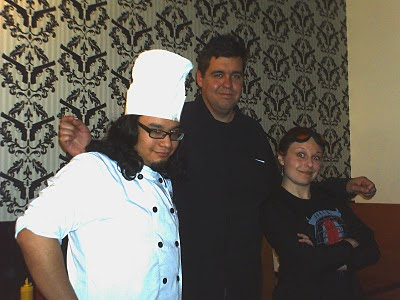 Well, here I am sitting at the SeaTac airport, looking out the huge windows at the airports rolling into the terminal and baggage carts rushing around. I can say I spent the last 5 days doing what I love to do most in life- traveling, meeting interesting people, and writing.

I slept in a bit, which was welcomed after a few long days of hitting the street hard. I booked a hotel which kind of looked like a murder scene from a CSI show, but it was ok on the inside. After sharing a bunkhouse filled with backpackers from New Zealand, I was glad to lay in bed and watch CNN.

I walked around the Space Needle area a bit, and then walked up to a neighborhood known as Capitol Hill, where I had a brave mission: meeting the nefarious villains of ROACH.

LUNCHTIME WITH THE VILLAINS

Yes, I've heard a lot of strange things about ROACH. I figure if there are "supervillains" I should meet them, and try to see what they're all about.
I've been in contact with villains before. I've had some e-mail interviewing with Tiny Terror, who I consider an intelligent guy and his opinions will be missed if he has indeed "retired."
At one point Executrix was planning a villain themed bonfire, which I was going to attend. Executrix even included a clause in the proposed rules for the event:

"6) IF Tea Krulos does grace us with his presence, we shall be as accommodating as possible. Lets not scare him too bad!:)"

Unfortunately, it was canceled, much to the disappointment of marshmallow roasting villains everywhere.

ROACH has invited me to their "Seattle Headquarters" which is a gourmet hot dog restaurant called Po' Dogs. The place has a villainous handgun print wallpaper motif, and the dog selection is pretty insane. I mean a wasabi egg-roll dog? True villainy.

Hanging out in the back corner of Po' Dogs is time traveling, goggle sporting Agent Beryllium, evil chef couple Aluminum Chef and Fatal Phyllo and the volcano headed ROACH leader himself, The Potentate. I've been talking online with Agent B for awhile,enjoy hearing her opinion, and consider her a villainous counsel of some sort.

The Potentate told me he decided to start his organization of evil after seeing the famous, much circulated report on Cincinnati superhero Shadow Hare, which inspired many other villains as well (Sword Kane, Tiny Terror and crew among them.)

The villains have a couple of criticisms of the RLSH, and here is my understanding of them.

---RLSHs are in it for attention and an ego boost. This can be large scale- seeking media attention, or small scale- seeking attention of people standing around on the street. They are seeking credit for things many people do without a costume.

---RLSHs who are trying to patrol and crime fight are not adequately trained to take on criminal elements, putting themselves and others at risk.

I mention these things, because I would like to see as many possible people comment on this as possible. RLSHs- how do you respond to criticisms like this? What do you think of "RLSVs"? RLSVs- would you say my interpretation here is accurate? Do you have other criticisms or reasons for being a villain? And to anyone not involved in this scene- I'd like to hear your opinion too.

After hanging around Po' Dogs for awhile, I got the sense that ROACH (at least the four members present) were actually....nice, funny, normal people. I know a lot of RLSH see the funny side, but some don't. I'll give my opinion here- ROACH are online villains. The Potentate isn't actually walking around with a volcano for a head. Agent B isn't really out to destroy you. Aluminum Chef and Fatal Phyllo...ok, well, they actually are evil chefs.

The Potentate and Fatal Phyllo both had evil business to attend to, so Agent B, Aluminum Chef and I got on a bus and headed down to the Pike Place Market, a marketplace from another dimension for sure. Inside and out front were fishmongers, a brew pub, magic supply store, rare herb supply, barbershop, even a comic book store. An amazingly interesting place, and as a freelancer I immediately thought "incredibly interesting story here," although I'm sure it's been written about a thousand times.

I split from the villains to meet up with The Irishman in front of the market.

CHEERS TO THE IRISHMAN

First we did a drive around by the shore of the Puget Sound, cruising past the vast shipping yards and docks. We park under a highway overpass, leaking rain water. We walk up, back to the direction of the Pike Place market. Along the way, Irishman shows me an encampment of homeless people in a plaza below the highways. Irishman has been inspired by the visit to Vancouver and seeing Thanatos at work. He hopes he can start doing similar activities in Seattle.

We walk along Western avenue, and he points out a small park where there are a couple of drug dealers hanging around. He and his fellow Seattle RLSH, White Baron, spent some time watching the drug dealers at work,seeing what they were up to. Irishman frequently teams up and patrols with White Baron. White Baron and Mr. RavenBlade, another Seattle RLSH are hard to get a hold of sometimes, so we weren't able to contact them in time to get them to come out.

"This'll get the blood going." Irishman says as we scale the hill to 1st Avenue.
We're both a bit worn from the previous day, so after walking around awhile we decide to sit down and talk for a bit. We go to an Irish bar, of course, Kell's Irish Pub on a back street and order pints of Guinness straight from the tap. Irishman has chosen his name because he's proud of his Irish heritage.
He also breaks an RLSH stereotype- he's not really a comic book fan. He says the only comic he's bought was a used copy of The Incredible Hulk he picked up downtown. His inspiration to this scene was seeing Watchmen and then learning there were real life versions out there on the street.

After a couple pints, we're on our way.
Sláinte, Seattle.
Posted by Tea Krulos at 9:46 AM