SHOT THROUGH THE HEART 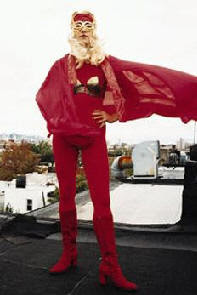 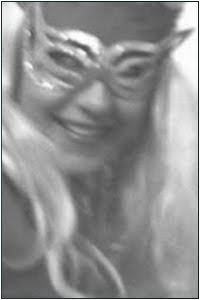 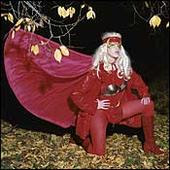 Author’s notes: Instead of the usual Thursday profile, I thought I’d share an interview I did with someone over the summer, who might not be handing out Valentines this weekend. Yes it’s Terrifica, a New York City woman, who by all accounts is a “Godmother” of the modern Real Life Superhero. Her secret origin is one many of us can relate to- a broken heart.

Terrifica began appearing in bars in the early 2000’s, dressed in a blonde wig, gold mask and Valkyrie bra, crimson and pink tights and cape.
“I protect the single girl living in the big city.” Terrifica told an ABC reporter in 2002. She elaborated that she was looking to help inebriated, decision making impaired women get into taxis and home safely, much to the dismay of horndogs city wide.

To help her in this fight, her utility belt held pepper spray, a cell phone, lipstick, a camera to take pictures of alleged male predators, a logging book, Terrifica fortune cards, and Smarties.*
It’s believed she “hung up the cape,” in 2005 or 2006, but as you’ll see, she contests this. Here is my e-mail interview, in its entirety with TERRIFICA.

When did you first decide to adopt the persona of Terrifica and what is the origin of that identity?

You have been influential on what is sometimes called the "Real Life Superhero" movement. In fact some "RLSHs" have cited reading articles about Terrifica as a direct inspiration to participating in the scene. Does this surprise you?

I am happy to learn that others are inspired by me to not only identify their personal missions, but to pursue them through heroic acts. I only hope that any other super humans out there have missions that are worthy and serve the better circumstances across the globe of womankind for there is still a great deal to be done.

How does it feel to be a "pioneer" of such a movement?

I was not aware of any movement before you asked me your question.

Do you have advice for the RLSHs out there?

Yes, I do. It is important for other super heroes to not only articulate their missions clearly and remain steadfast to fulfilling their purpose, but also to be brave. My mission is very dangerous, and I am frequently confronted by situations that would shock and horrify even the toughest of super humans. To fulfully [sic] fulfill one’s mission, a super human must not only be relentless in its pursuit but be willing to sacrifice all towards its end. Super humans cannot have friends for their friends will be in danger. Super humans cannot expect glory. Super humans must be prepared for a life of isolation and a public that misunderstands and condemns them. Super humans cannot be afraid to be completely alone in the world. Super humans with truly worthy missions will often be reviled. My advice is be prepared.

Unlike a lot of RLSHs who are doing general patrols…

If they are not doing patrols, how do they accomplish their missions?

…you had a more specific mission. You were looking for women who had their decision making impaired by alcohol. Why did you feel so strongly about this cause?

Because when a woman falls prey to a man who is willing to seduce her either for one night or a lifetime, she is destroyed. She is a victim of the mythologies of love and social order that men perpetrate in order to keep women in the role of servant, whore, wife, or mother.

Was your mission met with resistance?

By men? Of course. I prevent them from hurting women.

My understanding is that at some point you decided to hang up your crime fighting outfit. What was the reasoning for this decision?

That is completely false.

I will never abandon my mission until every woman in the world is empowered to make choices that will ensure that she is never a victim of a man’s manipulation and her own lack of self-esteem.

Do you still have the costume and if so, are you ever tempted to put it back on and hit the street?

I am always on the street. Every night. I am always out there. So... men... BEWARE. I will stop you. I will find you and I will stop you. If you run into me, your life will never be the same. (I have modified my uniform for undercover work. Publicity made me too well-known and undermined my success.)

I read some past articles on Terrifica. One refers to you as an "anti-cupid" in the title and another is titled "Meet the anti-sex in the city superhero." Is this accurate? Would you say you are anti-love, anti-romance, or anti-sex?

I do not know Cupid. I suspect he's just a myth. He's supposedly Aphrodite's son, right? The flying baby with the arrows? I'm surprised Greek mythology is still relevant these days. But I don't want to insult anyone's religion. So, I'll entertain the question. If Cupid is real, I would certainly not be anti-Cupid. It's wrong to be anti-baby. But I would take away his arrows.

Can you explain who Fantastico** is? In one article he seems to be portrayed as an actual single individual, and in another he seems to be more of a concept, something along the lines of "Fantastico can be any male." How can someone identify Fantastico?

Every woman who has ever had her heart broken by a cad has her own personal Fantastico. [SECRET IDENTITY DELETED] had hers. It is my job to make sure that no woman ever again suffers the consequences of getting involved with Fantastico.

FOOTNOTES
* The Smarties are for energy!
** Fantastico is mentioned in several sources as Terrifica's villainous arch enemy.

“The Anti-Cupid: Able to stop an ill-advised hook up in a single bound.” By Grant Stoddard, New York Magazine Nov.8, 2004

Interview by Kevlex, 1/25/2006 for the World Superhero Registry site.