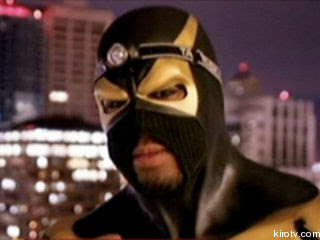 Phoenix Jones: Riding the crest of a media wave

Heroes in the Night is back from holiday break and I hope everyone had a decent one. Over the last couple weeks, there has been a lot of buzz in Seattle about Phoenix Jones and his group, the Rain City Superhero Movement.

Reports chronicle how he stopped a would be car jacker (TPM Muckracker picked up the story HERE and linked to the interview I did with Phoenix Jones HERE, which has led to a huge increase in traffic and some sort of debate in the comments section)- his team member Red Dragon confronted a Seattle bus pervert (story HERE) and most recently a confrontation which led to Phoenix Jones suffering from a broken nose (story HERE). Phoenix Jones, Red Dragon, and Buster Doe even made a recent appearance on Good Morning America, and the car jacker story got picked up on CNN.

Yes, Seattle is crazy for Mr. Jones and company, but not all the media has been positive. Heraldnet.com suggests that "Fake hero likely fake, officials say" in an article HERE.

And frustrated blogger Paul Constant is sick of hearing about it. He posted an entry on the Seattle Stranger's "Slog" titled "Please Stop Writing About Real Life Superheroes." In the write up (HERE)addressed "Dear Bloggers" he says:

I'm done writing about them, and you should be, too. Here's why:

Like 9/11 Truthers they're attention whores who will stop at nothing to get a couple inches of print, or a few seconds of air time. Every time I write about RLSs, I get tons of e-mails from other RLSs playing up inter-hero squabbles like penny-ante pro wrestlers, begging for me to write the "real story," which happens to be their story.

They're doing this for the attention. What they really want is to be adored, the way people adore comic book superheroes. But if they can't be adored, they'll take a snarky, condescending glance from the media, too.

And then after the attention fades, they try to figure out how to grab the spotlight again

I do understand Mr. Constant's frustration. There have been a lot of sloppy write ups over the last couple weeks about Phoenix Jones. Some of these reports are giving information that hasn't been verified. Reporting on something without evidence is lazy journalism that will bite you in the ass and/or make you look like a sucker.

However, making a blanket statement about RLSH all being "attention whores" is not accurate either. Why? Because it only applies to the ones who are actually attention whores. There is at least some percentage who have not sought out media attention and have even turned down media requests, or have been very selective on media. For instance, after I wrote an article for the New York Press about the New York Initiative, there was a bombardment of media requests- local news, reality shows, possible documentaries, German public radio- all of which were rejected by the NYI.

I routinely get e-mails from media outlets around the country asking if I know any local RLSH in their area. I always pass the info on. A Toronto news outlet recently asked me to hook them up, but the Toronto RLSH weren't interested. An Idaho news source was looking for locals, but the Idaho RLSH weren't interested. I've encountered a couple RLSH who weren't even interested in talking to yours truly! There are many RLSH that are only known to me via forums or from having met and not through media exposure.

Other RLSH have accepted media requests, but have not sought it out.

Point: A group of people can not be dismissed as "attention whores" if some percentage of the group does not seek attention or actively denies media requests.
Posted by Tea Krulos at 1:47 PM