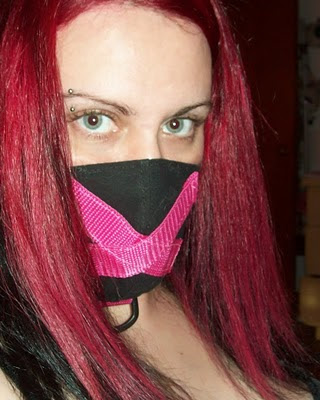 Operates out of: Ohio, the Hotbed of Evil

Quote: “I have been doing various forms of Animal Welfare for a while now. I am friends with other RLSH and decided to step it up a notch and add the mask for the cause. They are a great inspiration to go out there and do something good. Plus it shows you don’t have to look like everyone else.”

Author’s notes: She’s identified herself as “morally ambiguous,” an anti-hero, and has even been dubbed the “queen of the villains” by others. Insiders know, though, that Executrix is really a sweetheart. Evidence: She is organizing a Zombie Crawl for March 6 that will raise funds and materials for the Huntington (West Virginia) Cabell Wayne Animal Shelter. Good times for a good cause!
www.myspace.com/march_of_the_zombies
Posted by Tea Krulos at 8:20 AM