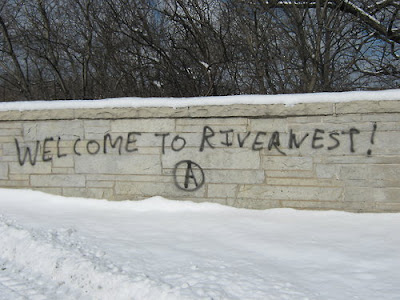 I love this neighborhood I live in, Riverwest. I first moved here when I turned 18, about 14 years ago. Since then I’ve lived here on and off, but mostly on.

What I loved about the neighborhood then is the same as what I love now. A huge creative class of musicians, artists, punks, hippies, bohemians, Goths, circus performers, activists, college kids, etc. live here. There are a lot of great cafes, bars, art galleries, and music venues. Generally speaking, a lot of these places have an air of being cool, but not snobbish or elitist. There are some really strong community ties here. We have a really great community newspaper, the Riverwest Currents, where I got in some of my first chops as a writer. There are neighborhood watch groups, an online network, block parties, street festivals, and I know some crazy dudes who even organize an annual 24 Hour bicycle race. And, of course, the rent is cheap.

Besides being known as a creative center, Riverwest also carries a certain stigma as being a neighborhood with crime problems. The media has run with this hysteria in the past. People get this one note song in their head about crime here. Here’s a good example- years ago my ex’s sister and her boyfriend wanted to meet us for drinks. They didn’t want to meet us in our crime warzone home of Riverwest. They would, however, meet us at the Red Room Lounge- about half a block away from Riverwest. In their heads, I guess, crime follows the boundary lines of the neighborhood, with some force field keeping it in!

I’ve actually seen the neighborhood visually improve over the years I’ve been here. A lot of shops that were boarded and barred up repainted their stores and opened up the windows again. A couple of fantastic community gardens have been developed. Gordon Park and Reservoir Park were both depressing places when I arrived- chain link fences, dried up ground tangled with litter, swing sets with no swings, basketball boards with no hoops. Gordon Park wasn’t a place you walked by at night; there had been several rapes and muggings in the park.
Both of the parks were given a major overhaul, so they are both cleaned up with new equipment. I see many families enjoying time there on a nice day.
I see these things and it makes me really, really happy.

Optimism aside though, the area still has crime. That is a fact, one that the many people who love this neighborhood struggle with. Some of the more common crimes are car break ins, vandalism and graffiti, and muggings. We also get more major crimes such as home break ins, rape, armed robbery, drug dealings and murder.
The car break ins, vandalism and graffiti are often done by the bored neighborhood kids.
We've also had an unidentified problem with arsonists in the area, as reported HERE.
The crimes sometimes seem appear in waves, but they never completely disappear.

I’ve never been mugged myself. That’s because most of these criminals are cowardly and don’t want to tango with a 6’5” dude that looks like Boris Karloff if they don’t have to. Many of the friends I have in the neighborhood, though, have been mugged at some point.

Let me give you an example, and unfortunately, it’s not the only one. A friend of mine, small female, maybe about 5’2” was working, closing up a café here on the main drag of Riverwest: Center Street.
She swept and mopped the floor. Cleaned the bathrooms. Did the dishes. Took out the garbage. Stocked. Balanced the register. She finished the work somewhere between 11PM and Midnight. She locked the door and headed east to meet some friends at a bar less than a block away. She was going to have a couple of drinks and socialize with her friends after a long shift. As she crossed the street, two young men stepped out of the shadows where they were lurking. These fucking (expletive NOT deleted) cowards punched her repeatedly in the face and ran off with her purse, which had maybe, 20, 30 bucks she got from the tip jar.

Do I wish I would have been there, also lurking in the shadows, dressed up like Rorschach or Batman? Believe it.
Posted by Tea Krulos at 2:24 PM