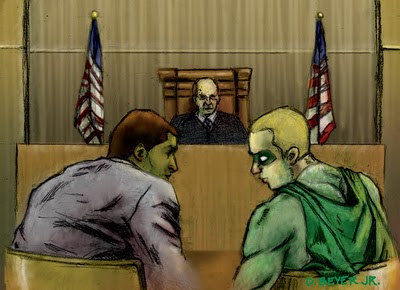 Imagine the scene- a somber looking judge, a confused looking jury box, an evidence table piled high with ray guns and bat-a-rangs. On the witness stand is the latest lunatic to escape from the Arkham Asylum, or an eccentric gadget builder. And at the defense table, a caped crusader, clearly annoyed he has to sit through days of courtroom trial examining the property damage he caused in a high speed chase after criminals through the city, or a race around the world with the Flash.

Any superhero in this situation would probably want Zack Levine as representation. Zack started a blog called SUPERHERO LAW that examines comic book situations in a real world legal system. Although some of these are out of this world (like examining what kind of permits you’d need for a secret lair in space), several are relevant to “real life superheroes” out on the street today. Zack was kind enough to answer my questions in an e-mail interview posted in its entirety below.

Could you explain what Superhero Law is, how the idea developed, your background in law, and your interest in superheroes?

Superhero Law is a blog that analyzes the legal issues that comic, TV, and movie superheroes would face if they were subject to real-world laws. As the site develops I intend to include more discussions of the real laws that directly impact the recent "real life superhero" movement.

The idea started when I was in my first year of law school. I used comic book characters and situations to remember the analysis for intentional torts and criminal law. When I was studying for the California bar I found a number of topics that I had analyzed in class notes and outlines and decided to start a blog to organize the idea.

I manage a transactional law firm in Glendale, CA that handles contracts and intellectual property concerns primarily for new and small businesses. My job definitely has nothing to do with superheroes, but I have been a long-time fan of comics and cartoons. My father was an avid collector of comics in the '50s and '60s and passed his passion on to me.

Let’s start with anti-mask laws. I heard some compare these to the “Keene Act,” the law banning costumed crime fighters in Watchmen. My understanding, though, is that many of these laws on are the books because of the Ku Klux Klan. Could you explain?

I've heard the comparison of anti-mask laws to the Keene Act as well and plan to do a post in the future on the constitutional challenges such an act would face if the government actually tried to implement one.

You are correct though that none of these mask laws were actually drafted to address superheroes. Quite the contrary, most are rooted in efforts to thwart organizations like the Ku Klux Klan from holding public meetings. The theory was that if these groups were unable to hide their identity in public that their activities and membership would be curbed.

Some more modern anti-mask laws are focused more on public safety and law enforcement efforts. For example, many states have laws forbidding drivers from covering their faces while driving or from entering a bank with a mask on.

When researching my post on anti-mask laws for Halloween, I found laws in the following states: California, D.C., Florida, New York, North Carolina, Virginia and West Virginia. Violations of these laws range from misdemeanors, which carry small fines, to class 6 felonies, which can land you in jail for a few years and cost a few thousand dollars in fines.

Copyright law protects an original expression of an idea that is fixed in a tangible medium. So while a superhero's persona could technically be registered under copyright law it would have to be "fixed" such as in a graphic novel or movie. Regardless of whether these persona could even be registered, writing about a superhero is almost certainly not an infringement of the copyright protection. All intellectual property protection carries certain exceptions for things like news reporting because the government, which grants protection, balances the benefits
to society of reporting the news against an individual's right to exclusively use an artistic work and determines that the dissemination of news is more important.

When it comes to taking pictures (in a journalism/news context) you're free to take pictures of pretty much anyone who is out in the open, with or without their consent. When you are in public you have almost no expectation of privacy and have to accept that someone can take your picture. Modern privacy law is actually an outgrowth of the development of modern cameras in the 1890s. The analysis is slightly different if you're using the pictures you take for something other than news reporting but there is still very little that someone can do if the picture was taken in public.

Most contracts do not have to be in writing to be enforceable, in fact, the physical document that most people refer to as a "contract" is actually just a written memorial of the true contract, which is the intent of the parties to bind themselves to certain terms.

That being said, a contract that is signed using a pseudonym, or even not signed, is still enforceable against the party as long as that person intended to enter into an agreement. Absent some other evidence that the parties did not agree on specific terms of an agreement, it doesn't matter whether the superhero or his/her alter-ego signed the contract, it is still enforceable.

There seems to be some debate on what separates legal behavior from vigilante behavior.

Let's say one of the RLSH is out on patrol and he (or she) sees a man angrily yelling at a woman and slapping her. The hero makes the right first step and calls the police. What next? Can they physically intervene? Is it possible they will be breaking the law if they do?

The line between legal behavior and vigilante behavior is definitely unclear and is not only different in every state, it is constantly changing. Using your fact pattern as an example I will explain some of the more universal rules, but the details still vary from state to state.

After calling the police, if the hero witnesses the woman still being accosted, he/she may be privileged to physically intervene. While the altercation is still taking place, the woman is entitled to protect herself (self-defense), which includes taking action that is reasonably necessary to protect herself and stop her attacker.

The determination of what is "reasonable" in the self-defense context takes into consideration things like relative size, the level of aggression used, and even statements made by the attacker. If the woman were to overstep what is reasonable then the roles would reverse and she would be the new attacker and the former villain would have a right to defend himself against her. So for example, if the man is yelling at her and slapping her and she pulls out a gun and shoots him, that response may not have been proportional to his attack and if he survived the first shot he is probably privileged to take physical action to stop her from shooting him again.

Similarly, if she were to use physical force after he had stopped and there was no need for self-defense then she would be seen as the aggressor.

As a third party, the superhero watching these events unfold is able to step in and exercise whatever actions she could have taken on her own behalf. So, if she could have wrestled him to the ground as a reasonable response to his yelling and slaps, then the superhero could do the same.

The hero is also subject to the same limitations about taking action after the aggression and need for self-defense has come to an end (basically you can never chase a criminal down and lay a hand on them after the fact).

Additionally, I have been using the word "privileged," which comes into play when responding to your next question of whether they would be breaking a law. Technically, any use of physical force against another person is a criminal act, but in the case of self-defense or defense of a third party, the acts are privileged meaning they are excused under the law. Raising a self-defense or defense of others defense if you are charged with a crime such as battery is essentially an admission that you committed the crime but that you had a right to do so based on an exigent circumstance.

About the illustration- David Beyer, Jr. is a Milwaukee illustrator and cartoonist who actually had a brief stint as a courtroom sketch artist. You can see more of his work on his LiveJournal. The people depicted in the illustration are not based on actual RLSHs, lawyers, or judges.

Tomorrow- Oh boy, a whole lot of talk about vigilantes.
Posted by Tea Krulos at 2:57 PM