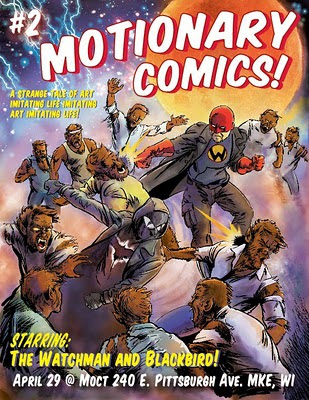 Motionary Comics is a collaborative art project to create a giant wall sized comic mural. The first round was held last year and riffed off of the classic fairy tale of Rumpelstiltskin. This year the comic story will be written by Tea Krulos with improvisation by the collaborating artists. The event will be held 5PM until bar close at Moct Friday, April 29.

Chang Beer is sponsoring the event and a percentage of beer sales of Chang (and additional funds raised) will be donated to United Way.

The Watchman and Blackbird both will be making an appearance at the event, and an invite has been extended to other Midwest RLSH.

In addition, there will be a few surprises throughout the evening. The event will be well documented and photos/ video will be shared here in the future, along with media we pick up along the way.
Posted by Tea Krulos at 12:52 PM