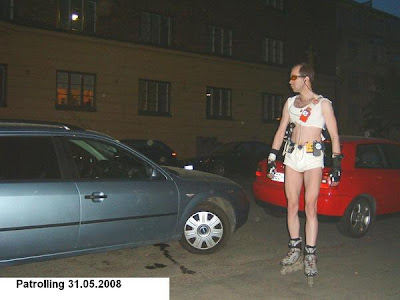 Operates out of: Helsinki, Finland

Comic book Inspiration: Skateman, a comic by short lived Pacific Comics, who only produced one issue of the title in 1983.

Quote: “It is difficult to say when I started to be a real life superhero. At first my purpose was only to skate on the streets for my physical exercise. However, while I was skating I noticed that oppurtunities to help people increased little by little. It was like a destiny for me. I couldn’t help it and I liked it! In 1996 I added a Guardian Angel pin on my skating uniform and decided to call myself LASERSKATER.”

Author's notes: Laserskater keeps a book of good deeds he performs while on patrol, and rather than write more about it, I thought I would share his summary for 2009: