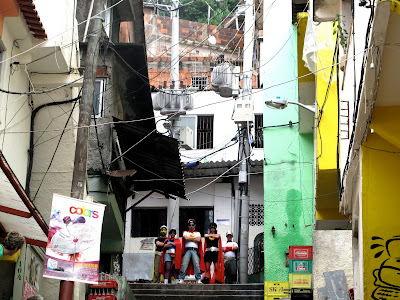 About: The Herois do Cotidiano (Everyday Heroes) are unique in that they operate as an activist collective. They have matching superhero outfits, and are named for the skills they want to emphasis in their lives.

The group is led by a professor of theater, who calls herself Heroina da Escuta. The group includes one of her fellow professors, Heroi da Organizacao,and three students round out the quintet.

An article in the Brazilian newspaper O Globo described the group’s mission.

“The collective does urban interventions and performance art to show that small heroics can be done by anyone. They’ve cleaned up the statues of Gandhi and Getulio Vargas* (symbolically cleaning his teeth), collaborated with community helping people in office and helped with simple gestures such as paying attention to patients arriving at hospitals.”

Besides cleaning statues and being good neighbors, the group has also formed a meditation class and tries to find other ways to mix activism and performance art. For example, the O Globo also mentions how the group tried to set people’s worries free with a literal visualization.

“The group went to Morro Dona Marta and did a performance urging residents to write papers that would like to get rid of worries. They wrote problems such as fear of landslides, earthquakes, water shortages, lack of health education, and flew them away from the hill, symbolically tied to helium balloons.”

*Vargas was the 14th and 17th President of Brazil. I don't know enough about Brazilian politics to tell you why they would be cleaning his teeth.