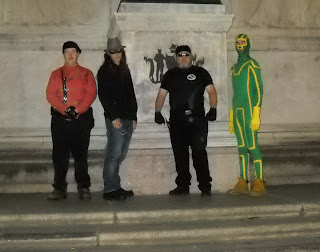 Operates out of: Albany, NY

Activities: "We do everything, from escorting people that don't feel safe walking alone, to patrolling the streets for crime, to fund raising during the day.
Albany loves us for the most part, sure we get the occasional drunken bastards, but all in all they love us."- Fox of Albany

Author's notes: One of the interesting things about examining real life superheroes is seeing how the concept is interpreted in different parts of the world- the Herois do Cotidiano from Brazil, for example, do a sort of superhero performance art. The documentary Super Amigos looks at the "social luchadors" of Mexico City.

A group of heroes has formed in Albany who include the suffix "of Albany" in their names. Fox of Albany says his persona is an original(although there is also a clandestine environmental activist and comic book character that share the same name), but Kick-Ass of Albany obviously is one who hasn't tried to distance himself from the comic book/movie of the same namesake(there is also rumored to be a Hit Girl of Albany) and Spirit of Albany has modeled himself after Will Eisner's classic detective hero, The Spirit.
Posted by Tea Krulos at 8:28 AM