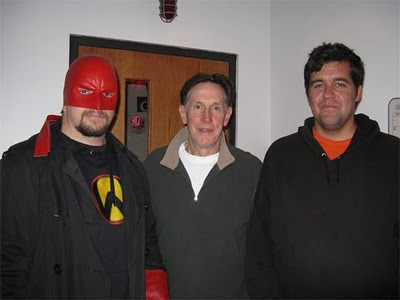 The fine folks at Third Coast Digest featured a podcast interview with me today. Under the direction of managing editor Erin Petersen I was interviewed in the WMSE (91.7FM) studios by Mark Metcalf.

Mark is an actor who portrayed memorable and prickly characters that waged losing battles against the toga party loving members of Delta House, Twisted Sister, and Buffy the Vampire Slayer,among others. Although these characters are sinister and plotting, I found him to be a really nice guy. He moved to Wisconsin in 2000 and now works at First Stage Children's Theater and is an advocate for the local arts.

There is a short write up by Mark, some great photos by Brian Jacobson, and the interview itself here:www.thirdcoastdigest.com/2010/10/podcast-mad-as-hell

This will be followed up next week Thursday with a podcast interview between Mark and The Watchman.
Posted by Tea Krulos at 12:46 PM