I AM IRON LAMB 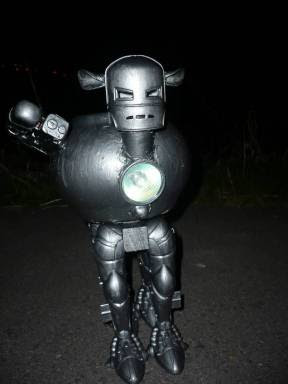 MAN, MACHINE DEFEND DUTCH SHEEP...HEROES IN THE NIGHT HAS EXCLUSIVE FIRST PICTURE OF LAMB OF STEEL

Real Life Superheroes exist all over the world, and many have adapted the concept to fit into whatever needs they see in their own corner of the earth. Take for example the Iron Lamb of The Netherlands, a RLSH unique for two reasons:

1. The name refers to a collective of a remote controlled robot and the man who invented and operates it.
2. This man and machine's mission is to defend sheep.

The Iron Lamb machine was just recently completed, and Heroes in the Night was offered to debut the first photos of the invention here today.

The Iron Lamb origin story was also described by the man behind the project:

"It all started around May 2008. In the meadows around Zoetermeer, a brutal attack on a sheep took place. It wasn’t the first time- in 2006 a sheep was set on fire with gasoline, and in 2007 two 2-days old lambs were killed by hammer blows on the head. This the police found a sheep beheaded and hung at a tree. We don’t have animal cops (like in the U.S.) and the police had other priorities, so I decided to help out and began patrolling the meadows in civilian clothes, armed with a camera. The attacks occurred on weekends and in a small area so I thought I got a good change of catching a glimpse of the one that was behind this all.

Another attack took place in August 2009 while I was out of town. Don’t know if I could have caught in in the act if I was there or not, but a lamb was tied to a picnic table and was cut from head to groin. Autopsy on the poor creature revealed that it was done while the lamb was still alive. In May 2010 a guy was caught and confessed to the mutilation and killing of 2 sheep and 3 lambs. He was sentenced to 3 weeks of jail and a fine of 500 euros.

This sentence was based on the fact that he was booked for trespassing and property damage (the animals). Nothing was said about the cruelty of his crimes and the fact he had fun seeing those lambs suffering. Just property damage."

Iron Lamb says these events inspired him to become a protector of the sheep, but a couple of obstacles were in front of him.

First, there are mask-laws in the Netherlands so try to use a secret ID could give me problems. Second, the things are happening in the fields and if I would enter the fields, according to the Dutch laws I would be trespassing myself.

How would I do my “thing” and still act according to the laws of my country? Then I got an idea from a source most of us are using as an inspiration source. A comic book. I read the DC book, “Kingdom Come” wherein Batman is an broken old man. He doesn’t go out on patrols anymore but uses remote-controlled batdrones he controls from the Batcave.

I asked a hypothetical question to a friend of mine who works at a law-firm (not telling him about my plans) and learned that the use of a remote controlled device was a way to surpass my problem and was in the limit of the law.

Now with the idea of creating a remote control robot, there was now the thought process on what the creation would be.

One night I saw the first Iron Man movie. There was a scene wherein our armored hero protected a village from thugs invading it. He just jumped in and protected them against the evil that was done against them. I decided I would built an Iron Lamb. I have based the Iron Lamb on the gray armor Tony Stark used in his first 2 adventures.

I now patrol with the Iron Lamb at weekends. The iron lamb uses non-lethal weapons, has a camera and uses warning equipment to make a possible crime more visible for everyone living close to the meadows.