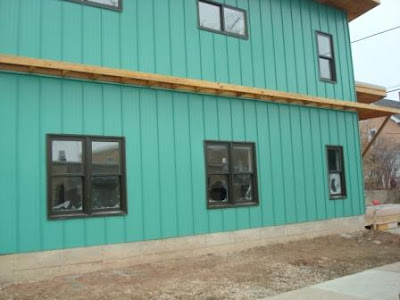 WORD ON THE STREET
If you read my last entry, you’ve probably figured out that I’m not just talking about the ups and downs of my neighborhood for the hell of it. Tonight I’ll be joining Milwaukee Real Life Superheroes Watchman and Blackbird for a patrol of Center Street. Also joining us will be “Team Cthulhu.” More on them and our methodology in the third part of this story, to be posted tomorrow.

First I’d like to share the word on the street. Whether you’re a writer, a RLSH, or just want to know more about your surroundings, it’s helpful to know the word on the street. In this case I started by phoning Jan, the editor of the Riverwest Currents, a community newspaper I mentioned last entry. Jan gets an earful of everything that goes on in Riverwest, including crime and as expected, she has a few things to pass on.

Number one in Riverwest news this week is the repeated vandalism of a couple of energy efficient houses recently built, but not yet sold. The expensive, thick, energy efficient windows must have been smashed with baseball bats or a crowbar last weekend. These houses have had their windows smashed before with graffiti of the anarchy symbol and “YUPPIE SCUM MUST DIE” scrawled in black spray paint.
The people who built the houses have a small company based here in the neighborhood. Acts like this discourage people from building and buying in the neighborhood.
Jan also reports that park benches are being stolen from Reservoir Park- probably to sell the metal. She recommends a local business owner to talk to, who has “always got a sharp eye on the street.”
Lastly, she reminds me that with this being the first warm weekend night alleyways can turn into danger spots.

After talking to Jan, I head up to Center Street to get the vibe and stop in a couple businesses. As Jan said, the weather is fairly nice, a little drizzly, but warm and so a lot of the bars, restaurants, and cafes are full of people.
My first stop is the Riverhorse tavern, a place I’ve done some “deep meditation” in. If you want to get the word on the street, bartenders are good people to talk to. They hear all.

I tell the bartender I’m “writing a piece about crime on Center Street.” He has a pretty clean report- can’t think of major incidents, other than having to kick an occasional crackhead out for trying to steal tips or panhandling. His last personal encounter of crime was two years ago when him and his girlfriend were robbed at gunpoint “by a 15 or 16 year old kid” a block away on Center and Fratney Streets.

I cross the street and head into the Fuel café, which has serving coffee here for approximately 17 years. When they first opened they had several instances of armed robbery, but the employees here tonight also have an optimistic report. They say someone had a wallet stolen off of their table, and someone tried to steal a purse off of a table (but didn’t succeed) and there have been attempts to steal out of the tip jar. No armed robberies and they hadn’t heard of any customers or employees getting mugged.

That’s good news. Maybe tonight will be a quiet, peaceful night. Then again, it is a warm night and there are more people out. That sometimes equals crime.
To help everyone out there in this operation tonight, I’ve done a handmade map of the Center Street area, drawing in the businesses that will be open and a couple “points of interest.” I think the most potentially useful feature is that I’ve numbered all the businesses with their addresses. Should we have to call something in, it might help in identifying the exact addresses, which are sometimes missing or not immediately visible.

Now I’ve got to quick clean up the meet up spot. In the past I’ve joined RLSH at a variety of meet up spots- the statue of Mary Tyler Moore in Minneapolis, an abandoned carnitas stand on Milwaukee’s south side, city parks, cafes, and street corners. This time, the meet up spot, like the patrol itself, is a little bit closer to home. Literally. My kitchen table.
Posted by Tea Krulos at 6:35 PM