RETURN OF THE RED ARROW 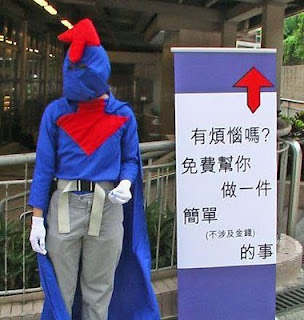 It is strange there isn’t a strong RLSH movement in Asia. After all it is a culture that has picked up some odd bits of American culture (baseball, Rambo movies, and rockabilly for just a few examples) in Japan in particular. Japan also has a culture that loves manga and anime, giant lizards and robots.

Even the current Japanese first lady, Miyuki Hatoyama, describes meetings with aliens, including a trip to Venus, and a meeting with Tom Cruise in a past life in her book “Very Strange Things I’ve Encountered.” There has been at least a couple Japanese reports on RLSHs.

So it would seem RLSHs would not only be welcomed, but maybe even decorated as public ambassadors or state spokespersons!

However, Red Arrow of Hong Kong is one of the only known RLSH of Asia. He is dressed almost like a Hong Kong version of the DC superhero Red Tornado. He has a blue cape and shirt with a giant red arrow and a blue mask concealing his face with a plush red arrow stuffed with Styrofoam attached to the forehead.

A 2006 YouTube video shows him making the costume, then going out into public, where he hands out candy at a school assembly, says hi to people and offers favors, performs yo-yo tricks, hands origami swans to children, and offers to shade pedestrians under an umbrella.

In a second video, shot on Christmas of 2006, he walks around handing out 100 small gifts to “kids in poor places in Hong Kong.”

On September 19, 2007 he updated his MySpace page, announcing he would be moving to the UK for 4 years. His trail, at least for the time being, seemed to have disappeared there.

On Friday (April 2), however, the Red Arrow appeared on the RLSH.net forum, announcing that he was currently in the UK, had not been active in RLSH activities the last several years, but was making a return to the scene.

I guess he's letting the giant red arrow on his head guide his way.
Posted by Tea Krulos at 5:27 PM