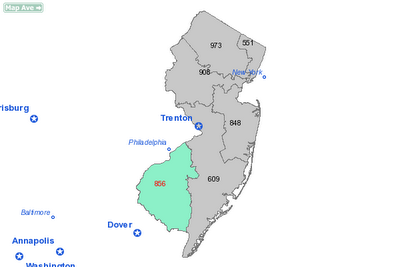 Beware of this area code

It was a dark and stormy night and strange game was afoot on the Creature Feature show yesterday.

I called in and joined host Krampus, along with guests Mixsae, Mr. Jingles, RLSH Minuteman, information guru Metadata, and the mysterious detective Wolf. Krampus opened by mentioning villain in need Sword Kane’s request for help on his MySpace.

There were other “guests,” too, phoning in from the 856 area code of New Jersey.
The first to phone in was “Mandarth.”

“I AM SUPER PISSED OFF AT PEOPLE TRYING TO BE SUPERHEROES. IT MAKES ME MAD.” Mandarth announced, in a voice I can best describe as Sam the Eagle impersonating Sylvester Stallone.

"I KNOW THEIR SECRET IDENTITIES AND IN EXACTLY 24 HOURS, STARTING NOW, THEY WILL ALL DIE. TO DEATH." Mandarth revealed, and then continued to give the death clock countdown. As of this writing, 24 hours later, no RLSH have been reported dead.

If this all sounds threatening, Mandarth also revealed that he has a…feminine side. When asked if he knew supervillain prankster/ two time YouTube video producer Nemesis, he replied:
“HE IS MY THIRD COUSIN TWICE REMOVED FROM MY VAGINA…I HAVE TWO SEXUAL ORGANS ATTACHED TO ME.”

Krampus has since stated that he has reported this incident to authorities.

I myself don’t usually view someone as a threat unless they are standing in front of me wielding baseball bats or a giant kitchen knife (yes, both of these have happened to me, and yes, plural on bats).

I will accept the argument that threats of violence shouldn’t be ignored, but I’ve got a pretty solid hunch, like 99.9 percent, that Mandarth is a bored New Jersey teen engaging in some Bart Simpson style pranking.

There have been a number of short lived supervillains who have appeared to mock heroes and then disappear from the RLSH scene. These one (or two) hit villain wonders include the previously mentioned Nemesis, the gravelly voiced, invisible man looking Dark Horizon, and self proclaimed Shadow Hare enemy High Noon Tortoise.

To back this theory up, a second caller (from 856 area code) made repeated calls asking if she could order pizza, saying her name was (expletive), and that she was Ass-Bad’s psychic.

Ass-Bad says he is “not inspired by Kick-Ass at all,” that he is “15” years old, and also is from the 856 area code.
Here is Ass-Bad’s…uh…incredible story.

1. His dad, now deceased, was an ex-marine who trained him.
2. He was on a “daily patrol” when he saw a kid, about 11 he guesses, dressed up as the Red Mist character from Kick-Ass, being beat up by two males.
3. After intervening, he suffered “a few bruised ribs, one broken, a sprained arm, and two black eyes.”
4. Despite these injuries, he and the kid dressed as Red Mist did not file a police report. Ass-Bad says he was taken to the Emergency Room, where police were not present for unknown reasons.
5. Ass-Bad is now being threatened by unknown assailants on the internet.
6. Despite a lack of tangible evidence, the story was apparently a hot topic with the “cast” of Kick-Ass. Or atleast on two MySpace pages claiming to belong to Christopher Mintz (Red Mist) and Chloe Moretz (Hit Girl).

“Chloe Moretz” status update: Thank you Ass-Bad what you did yesterday shows that ur [sic]a great hero and thanks to the other RLSH for all that they do

Both pages were set up shortly after the premiere of Kick-Ass.

There was yet another WTF moment when villain Malvado SV called in at the very end of the show with some cryptic, British accented comments. I wrote about both Krampus and Malvado SV and their radio shows HERE.

Despite all of the…amusing call ins, I did get a chance to talk to the Creature Feature crew about a variety of RLSH related topics, including DC Guardian's charity work and the recent RLSH panel at an Orlando comic con.

Thank you for your hospitality, Krampus and guests, it was great to talk to all of you!
Posted by Tea Krulos at 7:15 PM