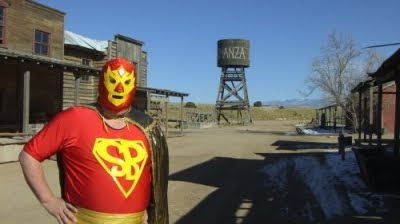 Operated out of: Mexico City

Activities: Starting in 1987, Superbarrio used his image for rallying people for political demonstrations, drawing attention to labor, housing, and immigration issues. He declared himself a candidate in the 1996 US presidential election, one of his platforms being to "abolish the border patrol and Drug Enforcement Agency" which he felt would “deal a blow to international drug trafficking.”

Street cred: It is reported that followers built a “giant lifelike replica” statue of him sometime around 1997. At the statue unveiling, the crowd chanted “You see him! You feel him! Superbarrio is here!”

Quote:"I opened my eyes and found myself as you see me with a voice telling me, 'You are Superbarrio.' I can't stop a plane or a train single-handed, but I can keep a family from being evicted."

Superbarrio with political author/linguist/ philosopher Noam Chomsky
Posted by Tea Krulos at 8:03 AM