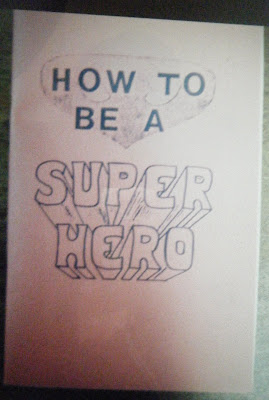 I think first heard about the “Night Rider book” as it’s usually referred to, in Vancouver from Knight Owl while cruising around in the Thana-van. What I was hearing was that an individual had written a guide book to be a real life superhero…in 1980.

I talked with Zimmer about this book again when I was in NYC, and of course both times I discussed it, I realized that it was important to me to read this book.
I finally got a chance to read it a couple days ago. Reading a copy is a rare opportunity, and some details on the book will tell you why.

-The book actually titled “How to be a Super-hero” by The Night Rider, was published in 1980 by GEM Enterprises with a PO Box in Morgantown, WV listed as the address. Judging from the lay out, style, and typos my guess is that this enterprise was a name Night Rider used to self publish the book himself or with a small group of people. This sort of thing is easy to do now with Lulu and other sites, but was significantly more difficult back then- you had to commit to a certain print run for you book- ranging from a very small one to a few thousand.
----> Point being: No one but Night Rider and his publishing partners know how many copies of this book were printed.

Tracking it down took an international RLSH effort- Toronto based detective Wolf located the book and then RLSH worked together and got Blue Lightning to go to the library, convinced the librarians that he needed to photocopy the entire book (they usually allow only 5 pages copied for copyright reasons) for scholarly reasons. They agreed and he photocopied the whole thing- the book is only 54 pages- and then scanned the pages.

Contents:
Night Rider provides chapters on physical and mental training (mostly “visualize yourself as the person you want to be" type techniques) a chapter on selecting an effective “uniform,” a chapter on weapons- mostly talking about different ninja weapons; nunchucks, bo, sai, tonfa, manriki-gusari, etc.
I think the most interesting is the last chapter, titled “More True Stories of Real-life Superheroes.” Yes, Night Rider uses this term a few times in his book, 30 years ago!

According to Night Rider, he was not alone out there and gives short accounts of the Phantom Avenger and Ms. Mystery.

The Phantom Avenger, he says, swung into action after a friend of he and his wife came to them for shelter from her abusive husband. The book gives an account of what happened next.

Betty(woman being beaten)'s husband pulled up the driveway and exited his car, an expensive white Continental. As he opened his front door, Jim(aka the Phantom Avenger!)hit him with a flying tackle that carried them both into the living room. Betty's husband looked up at Jim and cried, "Who are you?

"I'm the Phantom Avenger and I'm going to teach you a lesson you’ll never forget!"
With that, Jim hit his opponent with a terrific right that sent him sprawling over the coffee table. Pouncing on him, he raised him up to his feet by gripping the man's throat.

He tried unsuccessfully to fight back, but The Phantom Avenger was too much for him. A flurry of blows knocked the wifebeater across the room, each one hitting the mark. His mouth was bubbling red.

"You like slapping women around, eh?", the Phantom Avenger asked. "Well, get this. If you try to get at Betty at June and Jim's house or anywhere else, I'll be back to give you a real sample of what I can do"

And occasionally, a drunken and violent wifebeater is found tied to a tree with a sign around his neck:
"THE PHANTOM AVENGER HATES WOMAN BEATERS!"

She called the boss and without revealing who she was told him to meet her in the office, luring him with a sexy, suggestive voice. When he arrived, she was dressed in a disguise, hit him in the shins with her nunchucks and handcuffed him to his desk, leaving a note in the typewriter:

REMEMBER WHAT I TOLD YOU. IF YOU GET FRESH WITH ANY OF THE GIRLS, I’LL COME BACK AND BREAK BOTH YOUR ARMS!
--MS. MYSTERY

It is unclear as to whether she operated as Ms. Mystery outside of that incident.

Although these stories are interesting, nothing supports these stories except Night Rider’s book, so we have to take his word. Two other people he mentions, however, do have a lot of documentation: Curtis Sliwa and The Fox.

Night Rider talks about Curtis Sliwa and his first organization, the Magnificent 13. This group did street and subway patrols together in a group. Membership rapidly expanded and Sliwa renamed the group the Guardian Angels, identified by their red berets and jackets. At first the Angels faced some controversy, and occasionally still do, but have been recognized and awarded by a few mayors of New York City, American presidents, and other world leaders. They have chapters in 140 cities in 14 countries. Sliwa is still active with the group.

The Fox was an environmental activist at the very beginning of the environmental movement, before the term came into use. The name is clever in its simplicity- The Fox became active after seeing pollution, mostly unregulated, damaging the Fox River. Zorro also translates as “fox,” and The Fox became a Robin Hood or Zorro figure, especially to environmentalists.

The Fox was an environmental science teacher and lived on a farm in northern Illinois. His first action as The Fox was trying to plug up a sewage drain that was pouring waste from a soap factory into the Fox River. The Fox returned to see if the drain had been unplugged. It had. He describes the scene in his autobiography, Raising Kane: The Fox Chronicles.

"Before me lay a mini-disaster. Bank-to-bank soap curds filled the water from the dam back to the sewer. Looking into the pool, my heart sank.

"Floating upside down, with their orange legs relaxed in death, was the mallard hen and all of her baby ducks. The shock of seeing such carnage gave way to sorrow and then rage. Wading into the glop, I saw one tiny duckling’s foot feebly kick. Scooping it up and stripping soap waste off its partly fuzzy body, I tried to open its little beak and blow breath into its lungs. The little body went limp in my hand as the final spark of life flickered out. Everything got blurry as tears of sorrow and anger rolled down my cheeks."

The Fox decided to fight back against companies like this with direct action. When companies were polluting the air, he would put caps on their smokestacks or leave dead skunks by the doorway to the factory. In one case he walked into the reception area of a company and dumped several gallons of their chemical onto the carpet of the floor. At one point, he held a mock funeral for the Fox River. He fought back with signs, delivering sewage, plugging up drains and pipes, and dead skunks. He left messages at all of these scenes, signed with his calling card- the word FOX with a cartoon fox face peering through the “O.”

At one point, he held a mock funeral for the Fox River. He caught the ear of Chicago newspaper columnist Mike Royko*, who wrote about The Fox several times, leading to wider media interest.
The Fox died in 2001,at age 70, and his supporters held a memorial service on the banks of the Fox River.

If The Fox were around today, do you think he might dump gallons of oil in the offices of BP? And do you think most people would view him as a hero?

Bumper sticker of a supporter of The Fox.

*Royko first wrote a column for the Chicago Sun-Times, until Rupert Murdoch bought the paper in 1984. Royko said he would never work for Murdoch and moved to the Chicago Tribune. He is quoted as saying, "No self-respecting fish would want to be wrapped in a Murdoch paper."
Posted by Tea Krulos at 1:35 PM