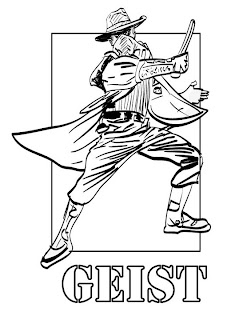 Geist, in coloring book form- artwork by the Purple Lotus

Geist, of Rochester, Minnesota,says that when he started out as a RLSH he wanted to be a "dark avenger type," but "eventually found that implausible in my situation and environment, so I concentrated more on humanitarian aspects of what we do."

Throughout this humanitarian work, he has encountered kids. He recalls one time when he got a letter signed by an entire second grade class. Another time he met some kids at a homeless shelter that were hip to Geist.

"I was surprised that one day, making donations at a homeless shelter that the volunteer kids at the front desk who I had never met had heard of me. They asked, 'You must be Geist, right?' I was like, 'Yeah, you must have just seen me on CNN's webpage, huh?' (I was pretty puffed-up and full of myself, I think.)

And they said, 'No, Man. Word on the street. Word on the street...' That was better than CNN or anything because it proved to me that what I actually do has an effect. And people hear about it. And if they hear that someone is looking out for them, then that's the message."

Geist found that he had a big fan in a young fellow named Ben who lives a bit Northwest from Geist in Alexandria, Minnesota.

"I'm not sure how Ben and his family heard about me at all." Geist says. He says one day he got an e-mail from Ben's mother on Facebook.

"She said that her son, Ben, had asked her to buy a Geist action figure. I really did laugh out loud. I said 'Sorry, but I'm not exactly on the market,' or something like that. Then she asked if I would be willing to meet Ben when they're in Rochester visiting the Mayo Clinic in April."

It was then that Geist found out that Ben is ill, and the prognosis isn't good.

"I told (Ben's mom) that I would be sending the one and only Geist action-figure known in existence, and some other items. I sent the action figure custom-made by Rev. Tom Fury, 3 autographed photos, a piece of material that my mask is made from, an LED gimmick and a letter," Geist says.

[Note: The Rev. Tom Fury is an artist who creates illustrations, puppets (including the nefarious villain puppet Octavious Fong), and custom made action figures of real life superheroes.]

After this initial exchange, Ben's family remained in contact and even joined forces with Geist and his fellow heroes of Minnesota.

"I want to mention that they've done so much for us since my initial package to them.

They substantially packed a whole buncha supplies that Blue picked up from them in Alexandria. Blue, Arctic Knight, Razorhawk and I gave them out in loads to People Serving People in Minneapolis, which houses entire families in need of housing and food."

In addition to Geist, Ben was quickly becoming a fan of Geist's RLSH allies.

Ben's story led to a brainstorming session on Geist's Facebook page in which a proposal to create a RLSH coloring book very quickly got rolling. A large number of RLSHs and artists volunteered to make the coloring book happen.

"The coloring book is an ongoing process that's probably working faster than I am at this point and that's great. I love the fact that there's momentum in this project and that there are other people not jumping, but leaping to join in." Geist says, explaining that the first book will go to Ben, and more copies potentially could be given to other kids in the future.

"The very first book is going to go to Ben. He's our cause and our care."

Meeting Ben is an event Geist looks forward to.

"Tea, there's nothing about this meeting with Ben that doesn't get tears streaming down my cheeks, man. I feel very emotional about it and I'm also inspired by how the rest of the RLSH community and ALSO the 'just-plain-fans' are stepping up to help Ben."

**UPDATE: I'm now being told Ben has adopted his own superhero persona- Power Boy- and received complimentary costume gear from Hero-Gear, a company that supplies RLSH and others with masks and suits.

Ben's fan art of Geist
Posted by Tea Krulos at 7:33 AM