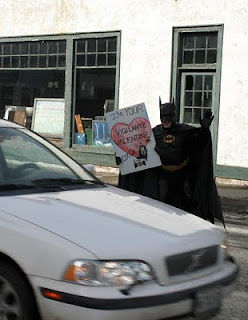 The Bar Harbor Batman with a vigilante valentine on the streets of Bar Harbor. Photo by Ezra Silk.

It always makes me happy to see the Heroes in the Night blog sourced in other media, big or small. In the past week, two blog entries here have been re-reported elsewhere.

Writer Genevieve Suzuki wrote an article for the La Mesa version of Patch.com titled "Who Was That Masked Man? Real-Life Superhero Visits Classes at Helix High!" which quoted from and linked to a blog entry here about DC's Guardian and a day spent speaking to students at Helix High School. (entry HERE)

Also, the Bar Harbor Times Soup is a website which was the source of info for an entry last week on the Bar Harbor Batman. I created a poll, which is open until Friday, to see what conversation I could generate about RLSHs with original personas vs. ones based entirely on an already existing character. Members of the RLSH world as well as Bar Harbor residents have weighed in on that entry HERE.

Results of the Bar Harbor Batman poll will be posted Friday. But please- this is not supposed to be a serious online trial of the man. It is just for fun and to try to generate discussion.
Posted by Tea Krulos at 5:37 PM