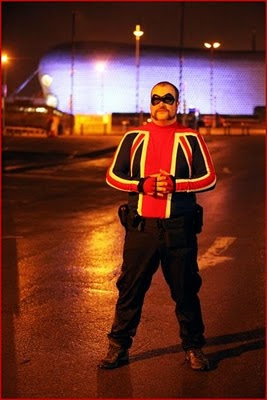 Operates out of: Birmingham (UK)

Equipment: Notepad, first aid kit, cell phone, and flashlight (or as the British call it, a torch)

Quote: "While I am over that area, nothing bad is going to happen. You can't change the entire city, but you can make one small part of it better each night. Even if it's just for one or two people, then that's a win."

Author's notes: I've had some contact with The Statesman in the past, exchanging e-mails about himself and his British RLSH colleagues. I even sent a Chapter on International RLSHs for him to look over.

The Statesman story recently got a media whirlwind in the UK, with the story being picked up by News of the World (HERE), and then other tabloids rushing to jump on board- the Daily Mail, Faded Tribune, and The Sun all reported on it, among others.

Comicsalliance.com also did a pretty funny interpretation of the story (HERE).

In true British scandal sheet fashion, the Daily Mail followed up by revealing The Statesman's secret identity, then tracked down his mum and his girlfriend to get a react quote from them.

Fortunately, they seem to support him and all of them later talked about the superhero's double life to The Sun HERE. The article also has video footage of The Statesman in action!
Posted by Tea Krulos at 12:09 PM