OUT IN THE COLD Update 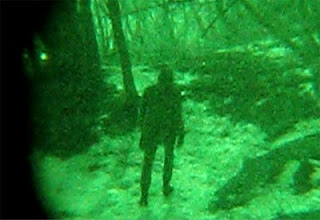 Night vision photo of Blackbird in the woods, taken by The Watchman

Today the streets outside here in Milwaukee were bombarded by snow and sleet, as winter continues. Last night local RLSHs The Watchman and Blackbird were on a mission to head out into the cold night. Unfortunately I couldn't join them, but just got a report back from The Watchman over the phone.

First the duo tried out some of Blackbird's new infrared camera equipment. Blackbird is always on the look out for good surveillance supplies- after some testing they discovered what bugs need to be worked out.

After that removed their masks and headed into the woods to drop off some supplies to a homeless camp in the woods near the river. After being tipped off about this, Blackbird and myself took a trek into the woods to find them, which I wrote about in an entry HERE. We had found their camp, but no one was there. Blackbird returned the next day and spoke with the group of four homeless people.

Watchman and Blackbird headed down to the camp with two bundles of firewood, pillows, socks, hats, hand sanitizer, canned food, peanut butter, and candy. No one was at the camp, although the firepit was still warm. The people were probably sleeping in their makeshift tents, hidden deeper in the woods, so they left the supplies near the base camp.

After that the two did a "rolling patrol" in Blackbird's car, cruising the streets of Riverwest and the nearby University of Wisconsin- Milwaukee campus.

"It was nice to have a specific mission to attend to," Watchman said. "It was a quiet night, pretty calm overall."
Posted by Tea Krulos at 3:23 PM