Center Street Patrol 07/24 and other news 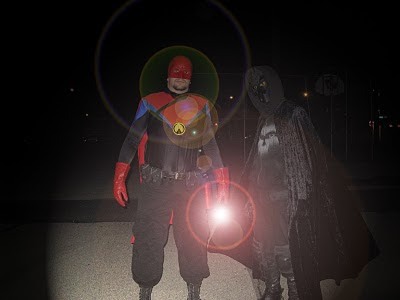 On Saturday I briefly met up with Milwaukee RLSHs Watchman and Blackbird as they again patrolled the Center Street area of Riverwest. I was only able to stay out for about a half hour, but I brought my longboard and got to try the new "headlights" on it. I attached two small but powerful LED flashlights to the bottom of the board with metal brackets to illuminate potential pitfalls on the mean streets of Riverwest- famous for potholes, rocks, and jagged cracks due to Wisconsin's extreme climate changes.

As it turned out, this was perfect timing- a recent severe rainstorm had knocked out ALL of the street lights on the side streets- only Center Street itself had working lights. I couldn't even see the guys less than a block away, so the lights came in handy as flashlights. They worked well at street level- the only adjustment is that they need to be insulated with foam to prevent rattling against the brackets. Now I just need to wait for my small portable radio to arrive in the mail- I'm going to attach it to the bottom of the deck so I can listen to the oldies while boarding around.

I took off into the pitch black and the two RLSH carried on.
Watchman reported about the rest of the night. He said it was quiet over all. The only thing they encountered, he says-

At one point, we went to check out a nearby siren. It was a fire truck that someone called on a perfectly legal fire someone was burning in a covered fire-pit in their yard. The folks there were told it was fine, but if they received further calls on it they would be asked to put it out so as not to waste valuable fire department time and resources. One of the guys there spent a lot of time talking to Blackbird and I, and even joined the patrol for a while. After bar closing time, we cruised around by car and had a good discussion.

I bet you that was on Pierce Street. There is a famous cranky old lady who lives there and calls the police on all of her neighbors every chance she gets- backyard bonfires, cars parked in the wrong place, stray cats, loud music at 7PM- no reveler is safe from her itchy dialing fingers.

In other news, it is the last Monday of the month, which means another column for our friends at Forces of Geek. This one features a hand drawn chart by yours truly, in an effort to visualize what the RLSH community looks like. I write about the varied approaches to the concept here: Many Heroes, Many Missions

After drawing the chart I realized I had kind of subconsciously drawn the Pepsi logo. And speaking of Pepsi- DC's Guardian was recently featured on the Pepsi Refresh Challenge blog HERE. It also features the eye popping Peter Tangen poster of the star spangled spandex crusader. And speaking of Peter Tangen, he has updated his site with profiles and posters of not only DC's Guardian, but also Nyx, Life, Superhero, Citizen Prime, and Crimson Fist.
Posted by Tea Krulos at 4:49 PM