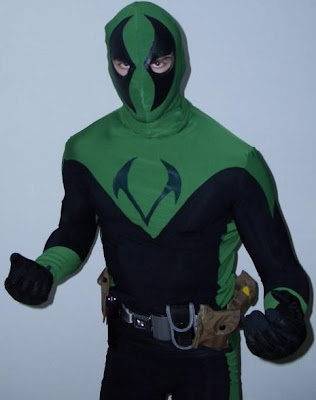 Operates out of: Columbia, TN

Quote:“I am just a guy trying to do what is right, in tights.”

Author's notes: Viper was featured in a couple of news reports after he ran into the Columbia Police Department, who made it clear they discouraged Viper's activities. They cited a local anti-mask law (Zack Snyder of Superhero Law talked about anti-mask laws in an interview on this blog HERE.)
From an article on the incident:

"Police determined (NAME DELETED) was not breaking any laws, other than a city ordinance that prohibits wearing a mask that obscures the face in public. He was advised of the ordinance and was not cited.

...detectives interviewed (NAME DELETED) and encouraged him to stop his patrols. Investigators are worried he could frighten the public or hurt himself or others."

You will note I deleted Viper's secret identity which this news article reveals. In my opinion it is dirty pool to reveal someone's identity if they want it to be secret (especially in a case like this- Viper was not charged with a crime)and I think it shows a weakness of integrity, which is why Heroes in the Night will never reveal anyone's secret identity.

A TV news story on the incident can be viewed HERE.
Posted by Tea Krulos at 8:11 AM