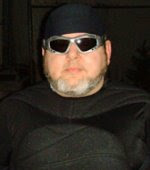 Operates out of: Upstate New York

Quote: "Being a superhero isn't about the wonderful things you can do. It's about the people you do them for."

Author's notes: Silver Sentinel tries to avoid media, and I can't blame him- there's a lot of goofball journalists out there walking the streets. I think the man speaks much wisdom, though, and any beginner (or for that matter experienced) RLSH should listen to his philosophies. SS is working on a RLSH handbook (with help from others) and I think he's a perfect author to take on such a project.
Posted by Tea Krulos at 9:31 AM